Who: Writers at any level interested in furthering their writing skills and business prowess

What: Contributors to the new, comprehensive writing guide Many Genres, One Craft, based on the Seton Hill University Writing Popular Fiction Graduate Program, will offer six workshops for craft and career. The three morning sessions focus on plotting with Victoria Thompson, character with Timons Esaias, and setting with Heidi Ruby Miller and Jason Jack Miller. In the afternoon, sessions focus on pursuing publication with Natalie Duvall and Matt Duvall, building a brand with Mary SanGiovanni, and investing in your writing with Michael A. Arnzen.

Instructors: Michael A. Arnzen is Chair of the Humanities Department at Seton Hill University, as well as a Bram Stoker Award winning author. His first novel Grave Markings also won the International Horror Critics Guild Award for Best First Novel. Other projects include a spoken word CD called Audiovile and the novel Play Dead. Selections from his 100 Jolts: Shockingly Short Stories have been made into the film Exquisite Corpse, produced by Jim Minton. Mike’s latest release is the collection Proverbs for Monsters. He haunts the Internet at http://www.gorelets.com.

Matt Duvall was a professional wrestler who appeared on national TV shows and was included in Pro Wrestling Illustrated magazine’s Top 500 wrestlers for 1996. He completed his MFA at Seton Hill University, which is also where he met his wife, Natalie. His short fiction has been published in a number of venues, including Chizine, The Ultimate Unknown, and Eye Contact. When he’s not teaching high school students, Matt practices Krav Maga, runs half marathons, and tries to avoid mowing the yard.

Natalie Duvall lives in a big old house in a little town in Central Pennsylvania. She enjoys walking as much as possible. Unless it's cold out. She is married to Matt Duvall and has cats (three of them -- Albert, Chun Lee and Eliot). During the day she's an 11th grade English teacher. At night, she writes Regency-set historical romances. In what free time is left, she trains in Krav Maga and is a lackadaisical triathlete. She blogs at http://dirtythirtytridea.blogspot.com.

Timons Esaias is a satirist, poet and short fiction writer, living in Pittsburgh. His fiction has appeared in fourteen languages, and his poetry has been translated into Spanish, Swedish and Chinese. His poetry chapbook The Influence of Pigeons on Architecture is in its second edition. He has also been a finalist for the British Science Fiction Award, and won the Asimov's Readers Award. He is Adjunct Faculty at Seton Hill University. His website is www.timonsesaias.com.

Heidi Ruby Miller is adjunct faculty at Seton Hill University, where she graduated from their Writing Popular Fiction graduate program the same month she appeared on Who Wants to Be a Millionaire. Her novels include Atomic Zion and Ambasadora. She is a member of The Authors Guild, Pennwriters, Science Fiction Poetry Association, and Broad Universe. Visit her at http://heidirubymiller.blogspot.com.

Jason Jack Miller is a writer, photographer and musician. An outdoor travel guide he co-authored with his wife in 2006 jumpstarted his freelancing career; his work has since appeared in newspapers, magazines, literary journals, online, and as part of a travel guide app for mobile phones. He received a Master’s in Writing Popular Fiction from Seton Hill where he is adjunct creative writing faculty and he is an Authors Guild member. When he isn't writing, he's on his mountain bike or looking for his next favorite guitar. He is currently writing and recording the soundtrack to his novel, The Devil and Preston Black. Find him at http://jasonjackmiller.blogspot.

Mary SanGiovanni is the author of the Bram Stoker nominated novel The Hollower and its sequel Found You, both from Leisure Books, and Thrall from Thunderstorm Books. Over the last decade, various periodicals and anthologies have published her short fiction, some of which was collected in Under Cover of Night. She co-edited the GSHW anthology Dark Territories. Mary received a Master’s in Writing Popular Fiction from Seton Hill University. Find Mary at http://marysangi.wordpress.com.

Victoria Thompson writes the Edgar-nominated Gaslight Mystery Series, set in turn-of-the-century New York City and featuring midwife Sarah Brandt and detective Frank Malloy. Her latest book in the series is Murder on Lexington Avenue. She is also the author of 20 historical romances. A popular speaker, Victoria has taught at Penn State University and currently teaches in the Seton Hill University master’s program in Writing Popular Fiction. She is online at http://victoriathompson.com. 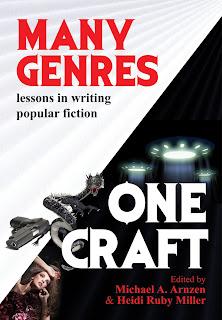 Endorsements:
“Finally! A book on writing category fiction, presented by those who do it every day. Choose a genre and jump right in.”
--Mike Resnick, Nebula and Hugo Award-winning author

"Many Genres, One Craft is a brilliant and insightful must-have book for any writer, from newbie to working pro. Highly recommended!"
--Jonathan Maberry, NY Times bestselling author of The King of Plagues and Patient Zero

Many Genres has everything you need to write and sell the book of your dreams. It is jam-packed with practical information, clear examples and brilliant insights, all delivered with clarity and wit. Skip the writers’ conference and read this gem from the masters of genre fiction!
--Suzanne Forster, New York Times bestselling author

"Speaking from experience, I can tell you there isn't a muse and if there is, she's already dating someone else." If there isn't a muse, as you'll read in this invaluable book for writers, MANY GENRES ONE CRAFT is surely the next best thing. No matter what you want to learn--from choosing the point of view for a scene, from getting the most out of a critique group to fine-tuning your final draft, from approaching a literary agent to promoting your published book in print or electronically or both--it's all there. The contributors know their stuff, and what they're teaching applies to writing at any age. MANY GENRES ONE CRAFT covers all the bases superbly, including issues I haven't seen addressed anywhere else in today's rapidly shifting publishing landscape.
--Renni Browne, co-author of SELF-EDITING FOR FICTION WRITERS