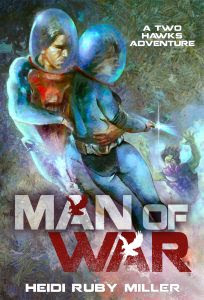 The wonderful crew at Meteor House sent out this press release for their giant e-book sale, which includes Man of War.

As our loyal readers around the world continued to stay at home, protecting themselves and their neighbors, we here at Meteor House want to continue to do our small part in helping everyone flatten the curve, and so for the past week all of our ebooks have been on sale.

One of the things we love here at Meteor House has been the opportunity to allow other writers to create new stories based in Philip José Farmer's worlds. Today we spotlight Man of War: A Two Hawks Adventure by the very talented Heidi Ruby Miller.

In Philip José Farmer’s novel Two Hawks from Earth, Native American pilot Roger Two Hawks flew through his first “gate” while on a bombing run over Romania during World War II. The gate brought him to Earth 2, a world where the Americas never existed. Since then he has continued to fight battles on Earth after Earth, each stranger than the last.

In Heidi Ruby Miller’s short story “Dakota’s Gate” (Worlds of Philip José Farmer 3 and included in Man of War as a prelude), set on Earth 3, North America never advanced past stone tools and rock shelters. But that’s where Two Hawks met another gate traveler, Dakota Cummings. It was Dakota, a woman turned friend and lover, who pulled him through a gate to her Earth, the most alien and deadly of all.

Earth 4. Two hundred years in the future. A war thirty-six thousand feet underwater. Two Hawks must draw upon all he’s learned during his gate travels in order to survive war between technologically advanced humans and their far-future hybrid cousins. This time more than just his and Dakota’s lives are at stake—the fate of an entire world is in his hands.