I can't tell you what an honor it is to write a sequel to a Science Fiction Grandmaster's novel. Thank you to Meteor House and the Philip José Farmer estate for this incredible opportunity. Thank you also to Christopher Paul Carey for writing the introduction and to Mark Wheatley for such beautiful cover art. And, of course, thank you to Michael Croteau and Paul Spiteri at Meteor House for their skills as editors.

In Philip José Farmer’s novel Two Hawks from Earth, Native American pilot Roger Two Hawks flew through his first “gate” while on a bombing run over Romania during World War II. The gate brought him to Earth 2, a world where the Americas never existed. Since then he has continued to fight battles on Earth after Earth, each more strange than the next.

In Heidi Ruby Miller’s short story “Dakota’s Gate” (Worlds of Philip José Farmer 3), set on Earth 3, North America never advanced past stone tools and rock shelters. But that’s where Two Hawks met another gate traveler, Dakota Cummings. It was Dakota, a woman turned friend and lover, who pulled him through a gate to her Earth, the most alien and deadly of all.

Earth 4. Two hundred years in the future. A war thirty-six thousand feet underwater. Two Hawks must draw upon all he’s learned during his gate travels in order to survive war between technologically advanced humans and their far-future hybrid cousins. This time more than just his and Dakota’s lives are at stake—the fate of an entire world is in his hands.

Featuring cover art by Mark Wheatley, an introduction by Christopher Paul Carey, and the short story “Dakota’s Gate” as a prelude, Man of War is a 24,500-word novella full of the action and adventure you’d expect of Philip José Farmer’s Roger Two Hawks.

Man of War will be published simultaneously in both hardcover and paperback signed limited editions!


And, as an added bonus, if you preorder before July 1st, you will also receive a FREE ebook copy of Heidi Ruby Miller’s novel, Ambasadora. 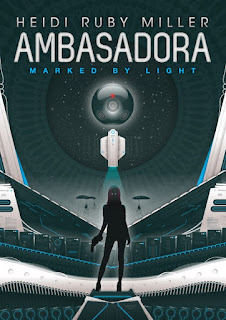 If everyone told you love wasn’t real, would you still be willing to die for it?
Sara Mendoza and Sean Cryer are.
In their multi-partner, caste-ruled society, love and jealousy are considered emotional fallacies, nothing more than fleeting moods and sentiments biased by hormones. Relationships and conceptions in this world obsessed with celebrity, beauty, and power are based on DNA and lineages…or should be. But not everyone believes in the ruling traditions of the all-powerful Embassy. A quiet rebellion prowls the dark underground of this shiny world where techno-militants calling themselves fraggers grow in numbers and bravado. The Embassy intends to silence the fragger movement before the heresy of equality spreads throughout the system.
Sara Mendoza is part of the Embassy’s plan. Captured, tortured, and falsely accused of treason, she is given a chance to win back her freedom. She only needs to charm information from one of the fragger leaders, then kill him. But by the time she figures out the Embassy’s intel is flawed and that Sean Cryer is her true mark, she’s already in love with him.
Sean knows why Sara is on his ship from the start, but as a lonely, anti-social doser, he doesn’t value his life, only his ideology within the fragger organization. Against his better judgment, he becomes her protector, each day caring more about a future he was always afraid to hope for.