Many thanks to my readers and fans as well as the multitudes of authors who have been gracious interviewees since I began this site back in 2005. 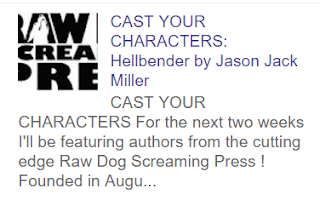 Here's another CAST YOUR CHARACTERS for the number 7 spot of all-time most-viewed posts (as of today), and this one belongs to my husband, Jason Jack Miller, and his award-winning novel HELLBENDER, part of the Murder Ballads and Whiskey series.

Since Jason isn't one for shining a light on his own accomplishments, I'm quite happy to: Hellbender (Raw Dog Screaming Press) won the Arthur J. Rooney Award for Fiction, the McLaughlin Scholarship, and was a finalist for the Appalachian Writers Association Book of the Year in 2013.

See who was cast for HELLBENDER at the original post. 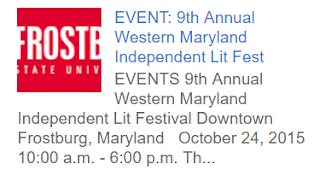 Coming in at number 8 is the Western Maryland Independent Lit Fest, which is hosted each autumn by Frostburg State University's Center for Creative Writing and its director, Gerry LaFemina. Frostburg will always hold a special place in our hearts because that's where we first met Jennifer Barnes and John Edward Lawson of Raw Dog Screaming Press (and Dog Star Books and Guide Dog Books and Anti-Oedipus Press, and Imaginary Books), which began a relationship that continues today.