SFFS: Snippet #1 from "Dakota's Gate" in The Worlds of Philip José Farmer 3 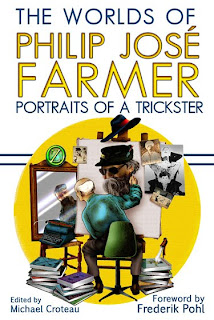 DESCRIPTION:
"Dakota's Gate" is a continuation of Farmer's novel Two Hawks from Earth. I fell in love with Roger Two Hawks' character--he's a displaced, romantic soldier just trying to get home. He relies on his instincts as much as his intellect to see him through one crisis after another, and never loses his spirit, though he is quite lonely. What's not to love?! So, I gave him a special someone by introducing a new character, Dakota Cummings, into the Farmer-verse.

--
SNIPPET:
"I get the gist of it from a translator," Dakota said.

"Translator?" Two Hawks looked around as though expecting to see a spectacled little man who whispered translations to her.

"Implanted in here." She tapped at a spot behind her ear, then inclined her head for his inspection.

The night wind teased wisps of her dark hair from her ponytail. He watched those errant strands tickle her neck and became a little jealous. Spiting them, he stooped down and used his fingertips to slide the pieces of hair behind her ear, brushing the side of his hand against her neck in the process. Now he could see a half-moon scar, no bigger than an impression from a fingernail.

"Where did you come from?" Two Hawks asked.