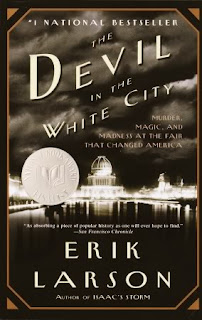 This weekend the Fallingwater Book Club met to discuss Erik Larson's bestselling book The Devil in the White City.

In this true story of the 1893 World's Fair held in Chicago, we find out about Daniel Burnham* who was Director of Works for the fair and who somehow brought this grandiose celebration to fruition, as well as Dr. H.H. Holmes, the serial murderer who used the fair as a venue to sate his grisly addiction.

Of course, the descriptions of architecture were just as interesting to this Frank Lloyd Wright crowd as the darker details of the women murdered by Holmes. Some attendees read pertinent passages and some had done extra research about the fair and the participants. Many pointed out how this early feat would have impacted Mr. Wright, especially as he was working with Louis Sullivan on part of the fair.

You can print a free reading group guide for the book at the website: http://www.randomhouse.com/crown/devilinthewhitecity/about.html.

*Daniel Burnham also designed several buildings in the Pittsburgh area, including the First National Bank Building in Uniontown in 1901 for J. V. Thompson. 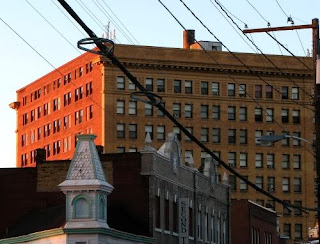