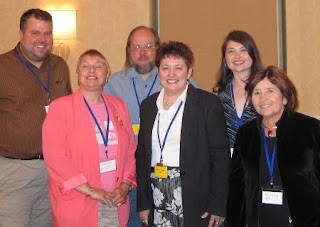 The 2007 Pennwriters Conference The Write Attitude was a wonderful experience, both personally and professionally.

Networking opportunities were the best of any conference I've attended because the group's officers, the editors, the agents, and the writers were all so personable. 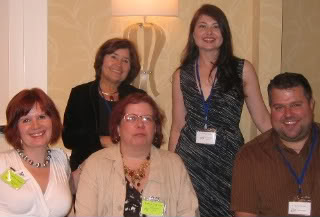 The above photo was taken after Victoria Thompson, mystery author and Seton Hill mentor, gave her keynote at the luncheon on Saturday. It was very inspiring because she used personal experiences to show just how fickle this industry can be, but also how rewarding to those who stick it out.

The three best panels I attended probably reflect where I am personally in the process of publication, not that I won't work on mechanics and style until I die, but after an intensive two year graduate program, I'm ready to move onto the next step: Agents Panel with Daniel Lazar, Rita Rosenkranz, Adam Chromy, Sheree Bykofsky, and Jenny Rappaport; Editors Panel with Jane Friedman, Ginjer Buchanan, Colleen Sell, and Robbi Hess; The Publication Process with Rita Rosenkranz, Jane Friedman, and Paul Martin.

This last one was Paul discussing the process of publishing his books with his agent Rita Rosenkranz and an editor from his publishing company Jane Friedman. Very insightful about "who gets a say in what" from cover design to contents. Jason and I had part of this perspective when we published our guidebook with Avalon last year. We were missing the agent part, an important part I will now say, but will hopefully rectify soon.

I pitched to one editor and three agents while at the conference. As a direct result. I am sending out my submissions this week. Here's hoping that some of those are accepted.

I also made some new author friends. Writers Valentine Brkich and Brian Butko agreed to participate in the HEIDI'S PICK SIX special non-fiction week coming up. 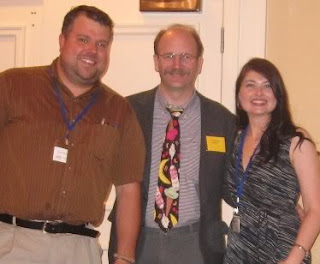 If nothing else comes from my time at the conference, it was still well-spent because it inspired me and gave me that turbo boost we writers all need now and then.
brian butko heidi ruby miller jason jack miller pennwriters pennwriters conference rita rosenkranz seton hill university seton hill writers shuwpf timons esaias victoria thompson writing