ARTICLE: Pick Your Punk by Heidi Ruby Miller in The Writer 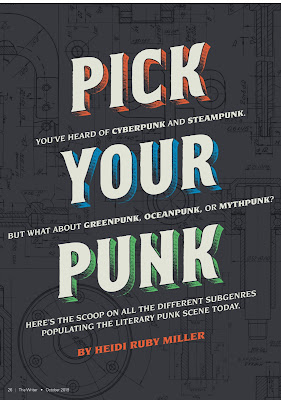 My article "Pick Your Punk" is in the October 2019 issue of The Writer magazine. It is based on a class I taught in Seton Hill University's Writing Popular Fiction MFA program and features quotes from K. Ceres Wright and Shelley Adina about the qualities that make each punk special.

Here's an excerpt:
It all started when Greg Shaw used the term punk in the April 1971 issue of Rolling Stone. The movement may have been already building, but now it was a word, and as all writers know, words are power.

Less than 10 years later, Bruce Bethke introduced a new version of that word to the literary scene with his 1980 short story "Cyberpunk." Said Bethke in the foreword to his story on the British website infinity plus, "In calling it that, I was actively trying to invent a new term that grokked the juxtaposition of punk attitudes and high technology. My reasons for doing so were purely selfish and market-driven: I wanted to give my story a snappy, one-word title that editors would remember."