ARTICLE: New Pulp by Heidi Ruby Miller in The Writer 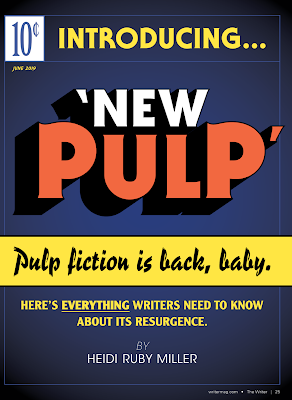 My article "New Pulp" is in the July 2019 issue of The Writer magazine. It is based on a class I taught in Seton Hill University's Writing Popular Fiction MFA program and features quotes from Matt Betts, Maurice Broaddus, Christopher Paul Carey, Mike Chomko, John Edward Lawson, and Lee Murray about the resurgence of this popular fiction genre.

Here's an excerpt:
Pulp fiction is having a moment. And I don’t mean the Tarantino movie from the ‘90s – that was having a moment since Jules gave away his wallet. I’m talking about the adventure stories of old with those provocative covers and dime-store price tags that are enjoying a renaissance thanks to the subgenre “new pulp.”

It’s clear that to understand new pulp, we need to know a little about “old” pulp. The term comes from the paper it was printed on – that cheap, thin stuff that began to disintegrate as soon as you cracked open the cover. Pulp was popular as magazines, novels, and novellas during the first half of the 20th century because it was escapist fiction with high drama, exaggerated villains and heroes, and punchy, super-vivid covers. These exploits served as a distraction during world wars, national economic hardships, and the growing pains of settling into a more industrialized world.