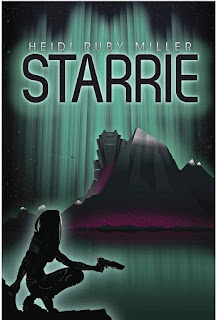 Starrie (From the World of Ambasadora)
DESCRIPTION:
Starrie is a direct sequel to Greenshift. It follows the story of Ben Anlow (David's younger brother) and his team as they embark on a revenge mission to bring down serial murderer and rapist, Liu Stavros, at his fortress in the inhospitable mountains of Tampa Three. But contractor Naela Starrie already has her own kind of vengeance planned for Stavros. Even as a battle-hardened soldier, Ben's not prepared for the darkness he sees in the female assassin, nor the way she challenges his prejudices about contractors when she makes a sacrifice to save to his life.

This novel runs concurrent with Ambasadora Book 1: Marked by Light, the first book of the main space opera series. And we follow a thread of Starrie into Book 2: Scarred by Light.

Look for Starrie from Dog Star Books in late 2013 and Ambasadora Book 2: Scarred by Light in 2014.

These twelve Armadan men and women started together thirty years ago and were still going strong. Sure there were some horrific moments along the way—Ben had lost track if he or Duncan had had more limbs reattached or replaced. Matt had been comatose for six months a few years back. Char nearly bled out during a raid on the Svetz Pods, and Kenya had to be quarantined for seven weeks in a radiation detox facility.

Any of them could have died or left the team, but decade after decade they all ended up back together. This was family, even to the ones who had amours and children spread across the Intra-Brazial system. Dreadfire Team were siblings in arms, and the only one of thirty Armadan special ops teams to be alive and original, thanks to Papa Ben, a nickname he never liked because it made him feel old, and at fifty-one, Ben was still a couple decades shy of mid-life.