April 01, 2011
So, here's where I'm supposed to talk about how I got my record deal and all that, right? Well, then that means I got to go back to that show at The Stink with Katy on Valentine's. It's an old skating rink that they turned into a brewery, and we played to a full house that night. They had kids jammed in all the way back to the bar. I was nervous, seeing as how it was the first time I ever played any of my own songs to an audience. But Katy looked good, and she was really confident, so that helped. Also, playing when your soul's at stake is pretty good motivation.

Anyway, I played like I had hellhounds on my trail. For real. We squeezed blood out of that stage. Notes I never knew existed dropped out of the air like flies from a bug zapper. Some of those kids never even knew what hit them. After the show the label guys were all like, '...you've got a great look and backstory...' and I was like, "I'd like to think it had more to do with the songs I wrote and the way we knocked them out of the park just now." Right then and there they saw how they were going to package us and market us, but I didn't care because I was finally getting paid to do what I loved.

But the more I think about it, the more I think my path really doesn't start back at The Stink. In fact, the night I talked to John Lennon probably had a lot more to do with it than the show itself. He was all like, '...get off your bum' or whatever. I had a few drinks in me and can't remember specifics, but it was a pretty good speech. You can say what you want, but I was sober as a nail when I said goodbye to him and watched him walk down those stairs. And since all the stuff he said jived with the stuff Joe Strummer had been saying I kind of took it all to heart. That's when I started to look at music differently, I started to see it as a way out rather than as a prison. I figured, look, if John Lennon's sitting here telling me it can be done, then I knew it could be done.

But really, none of that would have happened if it wasn't for you-know-who. The old 'One who shan't be named.'

You can read all about it in this book, The Devil and Preston Black. I don't love the title, but I didn't have a say. The writer stretched the truth a little here and there and, in my opinion, left some important stuff out that may have made me look a little less foolish. Anyway, it's over now. And I'm not going to give any advice except to say a deal with the devil ain't really the easiest way to go about achieving success or whatever. If I had it to do over again, I probably just would've tried a little harder. 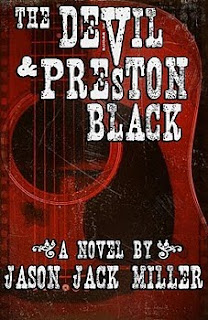