Jason and I had an incredible weekend in Washington, D.C. The highlight, of course, was Jon Stewart and Stephen Colbert's Rally to Restore Sanity and/or Fear. 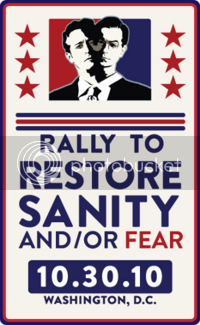 Rally to Restore Sanity and/or Fear

Thank you to Jason Jack Miller for taking all of the photos; that way I could just enjoy everything, but still have photographic stock later. 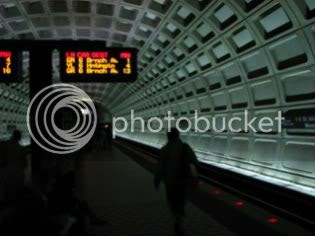 This photo was taken on Friday, October 29, but The Washington Metropolitan Area Transit Authority counted 825,437 passenger trips on October 30, the date of the Rally to Restore Sanity and/or Fear, breaking a 19-year record. 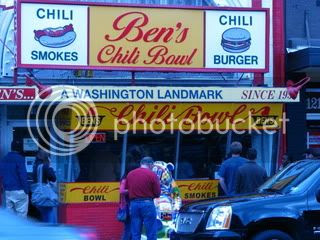 We ate lunch at Ben's Chili Bowl as soon as we got into DC. Awesome! 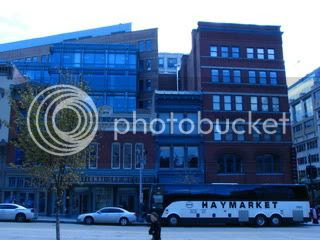 Then headed down the street to the International Spy Museum. It's hiding behind that tree. 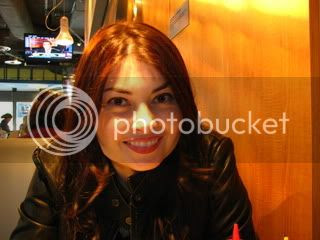 And, that's me acting like a spy in the cafe. 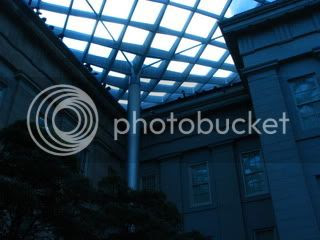 Our training allowed us to sneak into the National Portrait Gallery right through the front door.

On Saturday, we got to the Mall around 10:00 AM. The first sections were already filled, so we ended up in the middle across from the Air and Space Museum. The official crowd count was 215,000 people. 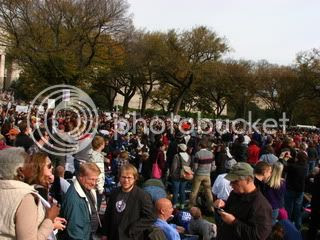 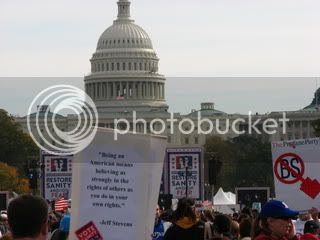 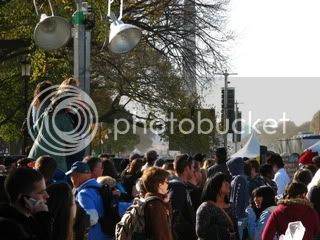 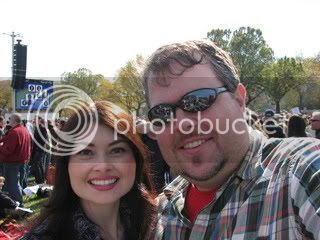 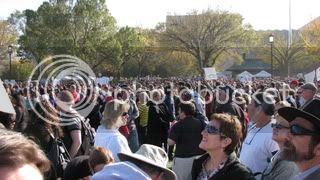 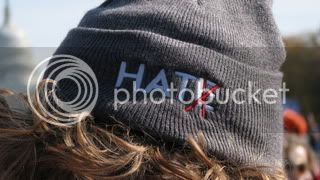 One of the best souvenirs was this hat.

The Greatest Poem Ever Written
Are You Sure?
Copyright 2010
By the Reverend Sir Dr. Stephen T. Colbert DFA

Did you hear that? No?
You’re probably going deaf
It’s your kids back home
Cooking up some crystal meth

Did you turn off the oven?
Did you set the alarm?
They still haven’t caught
the man with one arm

Look around at these people
How safe do you feel?
You’re car
when you parked
did you lock it?
Thinking reasonably now
what are the odds
that no one here
is a pick-pocket?

That guy who just coughed down your neck
Could he have an infection?
The restaurant where you went to brunch
did it fail its health inspection?

A mad man could set loose a virus
for which there isn’t a cure
and while these things may be unlikely
ask yourself … are you sure?

And can you be sure
that you won’t get ebola
from a tainted diet cola
toxic waste or getting chased
by a bearded Ayatollah.

Funnel clouds inhale
anthrax in the mail
your lover will discover
your vestigial tail.

Unlabeled Drano tornadoes torpedoes
the horrible sights of some guidos in Speedos
STD’s, PCB’s SUVs, UV Lights
A giant pimple on your face
you have a date tonight

You can watch videos from the event at Comedy Central, who broadcast the rally live. 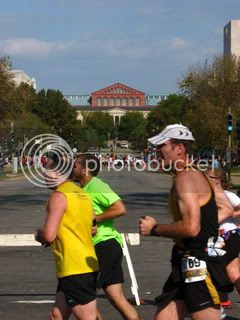 Bright and early on a chilly Halloween morning, participants began the Marine Corps Marathon. We cheered them on as we ate danishes and drank hot tea in front of The Castle.
"> 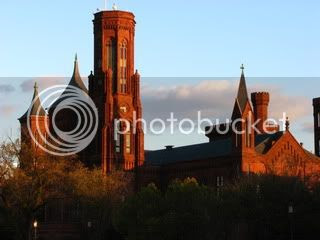 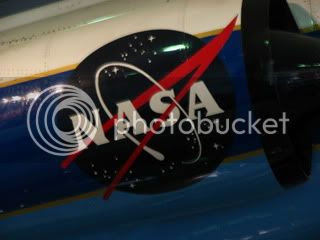 We couldn't visit DC without our traditional stop at the Air and Space Museum. 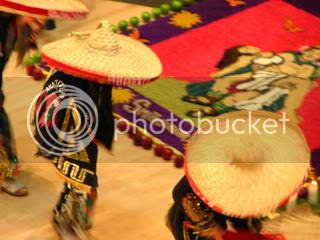 Before heading home, we stopped at the American Indian Museum to see the changing exhibits and catch a show for Dia de los Muertos.

A Final Note
In closing, I'll post part of Jon Stewart's closing speech because it was so inspiring and so...sane:

"I can't control what people think this was. I can only tell you my intentions. This was not a rally to ridicule people of faith. Or people of activism or to look down our noses at the heartland or passionate argument or to suggest that times are not difficult and that we have nothing to fear. They are and we do. But we live now in hard times, not end times. And we can have animus and not be enemies.

Unfortunately, one of our main tools in delineating the two broke. The country's 24-hour politico pundit panic conflict-onator did not cause our problems, but its existence makes solving them that much harder. The press can hold its magnifying glass up to our problems and illuminate problems heretofore unseen, or it can use its magnifying glass to light ants on fire, and then perhaps host a week of shows on the sudden, unexpected dangerous-flaming-ant epidemic. If we amplify everything, we hear nothing.

There are terrorists and racists and Stalinists and theocrats, but those are titles that must be earned. You must have the resume. Not being able to distinguish between real racists and tea partiers, or real bigots and Juan Williams and Rich Sanchez is an insult -- not only to those people, but to the racists themselves, who have put forth the exhausting effort it takes to hate. Just as the inability to distinguish between terrorists and Muslims makes us less safe, not more.

The press is our immune system. If it overreacts to everything we eventually get sicker. And perhaps eczema. Yet, with that being said, I feel good. Strangely, calmly good, because the image of Americans that is reflected back to us by our political and media process is false. It is us through a funhouse mirror, and not the good kind that makes you slim and taller -- but the kind where you have a giant forehead and an ass like a pumpkin and one eyeball.

So, why would we work together? Why would you reach across the aisle to a pumpkin assed forehead eyeball monster? If the picture of us were true, our inability to solve problems would actually be quite sane and reasonable. Why would you work with Marxists actively subverting our Constitution or racists and homophobes who see no one’s humanity but their own? We hear every damn day about how fragile our country is -- on the brink of catastrophe -- torn by polarizing hate and how it’s a shame that we can’t work together to get things done, but the truth is we do. We work together to get things done every damn day. The only place we don't is here or on cable TV. Americans don't live here or on cable TV. Where we live our values and principles form the foundation that sustains us while we get things done, not the barriers that prevent us from getting things done.

...Because we know instinctively as a people that if we are to get through the darkness and back into the light we have to work together and the truth is, there will always be darkness. And sometimes the light at the end of the tunnel isn’t the promised land. Sometimes it’s just New Jersey. But we do it anyway, together.

If you want to know why I’m here and what I want from you I can only assure you this: you have already given it to me. You’re presence was what I wanted. Sanity will always be and has always been in the eye of the beholder. To see you here today and the kind of people that you are has restored mine. Thank you."
america ben's chili bowl comedy central d.c. events heidi ruby miller jason jack miller jon stewart rally to restore sanity and/or fear smithsonian stephen colbert washington