Echoes of Earth
by Sean Williams and Shane Dix 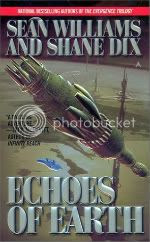 There are only two books that I’ve read twice: Madeleine L’Engle’s A Wrinkle in Time and Echoes of Earth by Sean Williams and Shane Dix. In the case of Wrinkle, I wanted to see if a childhood favorite would hold the same magic after fifteen years-and, yes, it did-but, for Echoes, it was all about the book’s style.

I don’t know which of these guys deserves credit for the great dialog and likeable characters and which one has the knack for creating interesting places, but the combination of the three left scenes from the book floating in my mind long after I had read them. Since I strive for the memorability factor in my own writing, I dissected a scene to discover what made it so lasting for me.

In Chapter 1.1.9, the protagonist, Peter Alander, visits the second of ten enormous alien-built spindles that surround the planet Adrasteia in the Upsilon Aquarius system, over seventy-two light-years from Earth. The chapter opens with a problem; Peter walks through a door in the spindle hub and instantaneously ends up in Spindle 3, thousands of kilometers away. His engram companion, Cleo Sampson, disappears, prompting Peter to panic. (Note: An engram is a copy of a person’s thoughts and personality which can appear as a hologram.)

This opening action plays out through short, crisp dialog between Peter and the Gifts, his guides through this alien technology. Also, we engage in Peter’s deep penetration POV--a stylistic favorite of mine—which gives us the psychological explanation for Peter’s familiarity with the doors to each spindle. They come from doors within his own life. It shows how we as humans are more willing to accept the alien through the familiar.

Once Cleo finds Peter again, he can relax and concentrate on the contents of this spindle and eventually the others. Through his POV we see the fascinating interiors: a planetarium, an art gallery, a library, and a sensory deprivation area. The planetarium shows all the stars of the galaxy. We have a hint from the Gifts that this will be useful later.

The art gallery is seemingly endless and contains wondrous examples of galactic art. We get a close-up of a few of these pieces, such as an orb that transports Peter to a beach (in-mind only) and a dizzying Escher-esque sculpture. This was where the chapter went from detail-deficient to very specific.

In the library, there are actual volumes of books, again perhaps to make Peter comfortable with the alien-ness of the place. The sensory deprivation area seems to be there for Peter to rest, something he has not done for several days at this point.

The end of the chapter shows a humanizing of Peter, an engram himself who chooses to live in an android body. (An example of that same theme of familiarity helping to assimilate the alien?) He asks his companion, Cleo, to stay and be with him while he sleeps. Until now, he has avoided most contact with her because she reminds him of what he is and what he is not.

That was quite a bit for a twelve-page chapter, and that’s why it’s memorable.

Overall, I liked the first part of this book set in Adrasteia better than the second part set in Sol system. Perhaps the concept of a huge floating frame inhabiting the space where most of our planets used to be was just too alien for me. (I probably needed more of the familiar to be comfortable.) The short to moderate-length chapters worked well for my reading style, and not surprisingly I prefer that in my writing style as well.

The biggest complaint I have is with an unsatisfactory resolution to a subplot. It involved Peter’s obsession with the woman that his original loved. Maybe we weren’t to know what happened to her engram--or I just missed the references. But even the second time through, I found myself still wondering about her.
a wrinkle in time books echoes of earth heidi ruby miller reading journal science fiction sean williams seton hill university shane dix the orphans trilogy writing writing popular fiction