Showing posts from December, 2019
Show all

ARTICLE: The In-Betweeners by Heidi Ruby Miller in The Writer 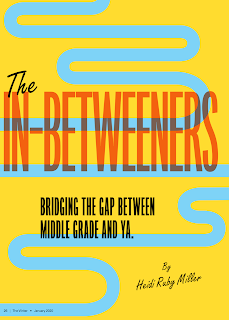 My article "The In-Betweeners: Bridging the Gap Between Middle Grade and YA" is in the January 2020 issue of The Writer magazine. It is based on a class I taught in Seton Hill University's Writing Popular Fiction MFA program and features quotes from Kathryn Miller Haines, Dr. Uwe Stender of TriadaUS Literary Agency, Nick Courage, and Stephanie Keyes.

Here's an excerpt:
Two years ago during the Writing Popular Fiction MFA winter residency at Seton Hill University, a discussion broke out amongst my students in a critique workshop geared toward young adult (YA) writers. They didn't think YA novels were really written for teens anymore, or at least early teens, yet most middle grade (MG) fiction felt as though it belonged more in the chapter book and younger reader category. Much of this concern was prompted by the idea that more adults wee now reading YA than teens were. Just look at the most recent Nielsen studies, which show that at least 80% of worldwide s…
Post a Comment
Read more


During the Burroughs panel last month at PulpFest in Pittsburgh, ERB Director of Publishing Christopher Paul Carey announced that I will be heading the second wave of the brand new Edgar Rice Burroughs Universe (ERBU) which is bringing together all of Burroughs's vast properties (including Tarzan and John Carter) like Marvel did with its characters and worlds in the MCU. Specifics about which character I will be taking over are still heavily under wraps but will be revealed when I am introduced to fans on a panel at San Diego Comic Con 2020. I couldn't be more thrilled and honored. Updates to come.