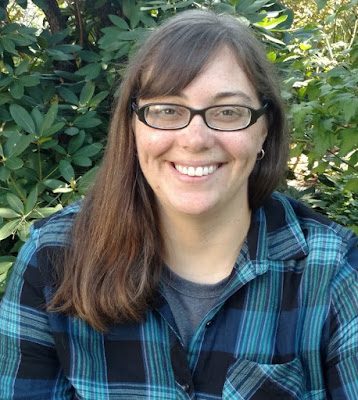 CARRIE GESSNER
1. Which of your characters is your favorite?
I like all of them for different reasons! But just in The Dying of the Golden Day, even if I lean toward Aurelia, I have to go with Mira. She’s smart, funny, confident, and badass enough to have conquered an empire. She’s kind of everything I want to be (yes, including the empire conquering!).

5. Who are you reading right now?
For a writer, I have terrible reading habits and hop between a bunch of books at once. My primary books right now are The Day Lasts More Than a Hundred Years by Chingiz Aimatov, The Elegant Universe by Brian Greene, and Bombshells Vol 1: Enlisted by Marguerite Bennett and Marguerite Sauvage.

9. Food you could eat every day.
Pizza. I have simple tastes.

11. What kind of music speaks to you?
Sometimes it’s hard for me to classify music genres, but I’d say my favorite is folk-pop or folk-rock, I guess, because the lyrics are often poetic and thoughtful. Stuff like The Waillin’ Jennys and The Swell Season. Right now, I can’t stop listening to the Waitress Broadway soundtrack by Sara Bareilles. It’s fun and sweet, but it also has more serious moments that make me think about life and happiness and all that. While writing, I listen to film and TV-show soundtracks to help keep me focused.

12. Do you outline your stories or do they just take you along for the ride?
Outline. My writing sessions are more productive when I know where I’m going with a story. It’s worked so well that my outlines have been getting longer. My outline for The Dying of the Golden Day was a page. Very bare bones. The outlines for my current projects are all at least ten pages!

Carrie Gessner received a BA in English from Carnegie Mellon University and an MFA in Writing Popular Fiction from Seton Hill University. She writes speculative fiction and literary fiction and drinks a lot of tea. When she's not writing or reading, she likes to go for walks in the park with her greyhound. 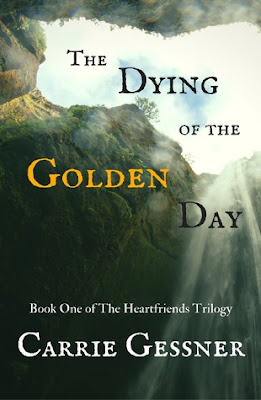 Marked by gray eyes that prophesy the death of magic, Aurelia seeks to avert her destiny by serving as advisor to the prince of Sunniva, but a chance to reunite two broken kingdoms soon forces Aurelia to decide where her loyalty lies--with her prince or with her magic. Meeting Brennus, the first male born with magic in centuries, further complicates her choice. When Edana, the first seeress in generations, receives a vision concerning the end of the kingdom, she embarks on a mission to locate the subjects of the prophecy only to stumble upon a threat to all those with the gift of magic. As prophecy becomes clearer and the future darker, they discover there are two sides to every coin--good and evil, hope and destruction, fate and chaos. Only they can restore balance, and only they can plunge the world into eternal darkness.
Posted by Heidi Ruby Miller at 11:19 AM 1 comment: 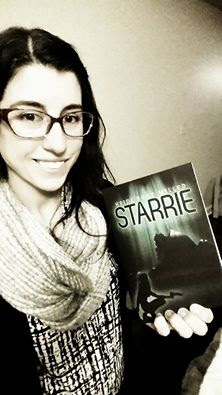 Hilary Neal of Pittsburgh holding her copy of Starrie (From the World of Ambasadora). Thanks much for the support, Hilary!

Posted by Heidi Ruby Miller at 2:22 PM No comments: 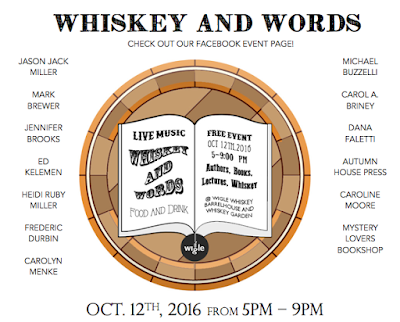 We hope you can attend our upcoming event Whiskey and Words on Wednesday, October 12th from 5pm- 9pm at Wigle Whiskey's Barrelhouse and Whiskey Garden in Pittsburgh's Northside. In addition to our fabulous line-up of authors, we will also have delicious Whiskey cocktails, Burgh Bites Food Truck and the Mangini Trio.

Hope to see you all there!
Posted by Heidi Ruby Miller at 8:00 AM No comments:

EVENT: PARSEC Talk "How Chronic Pain Has Made Me More Autotelic" by Heidi Ruby Miller

Meeting October 8, 2016 - Heidi Ruby Miller
"How Chronic Pain Has Made Me More Autotelic"
What started as a forced transition due to health concerns has turned into a wondrous full-circle journey as a creator, both metaphorically and globally. This is how I found my way back from writing as a daily business to embracing my words as the artistic endeavor it is.

Squirrel Hill Branch of the Carnegie Library
Room B - Next to the Rear Entrance
1:30 - 4:30 PM

Posted by Heidi Ruby Miller at 7:30 AM No comments:

INTERVIEW: Heidi Ruby Miller by Michael A. Arnzen at SIGMA 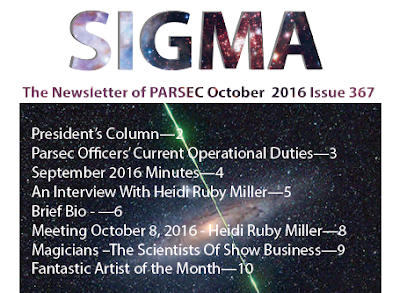 EXCERPT: Last year I gave a talk on “The Popular Uncanny” at Parsec, and Heidi Ruby Miller (my colleague in the MFA program at Seton Hill U, and my co-editor for the book, Many Genres One Craft), kindly interviewed me about the subject for SIGMA. I decided to return the favor, as she’s coming to speak to the group again on October 8th. If you haven’t met her before, you’ll see that Heidi is always effervescent and excited to talk about genre fiction. Here’s a taste of her wide range of interests and passions.

MIKE: Tell us briefly about your latest book, STARRIE.

HEIDI: Starrie was a nice side project within the Ambasadora-verse that adds to the main series’ mythos and sets up some events in Book 2: Scarred by Light. Surprisingly, it’s been my most critically acclaimed book so far, even though it’s not part of the original series.


Read the entire interview in SIGMA. 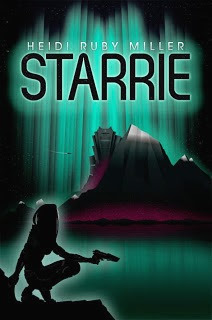 Posted by Heidi Ruby Miller at 1:21 PM No comments: