Showing posts from July, 2008
Show all

- July 28, 2008
#1: Veins , the debut illustrated novel by Lawrence C. Connolly , is now available from Fantasist Enterprises. You can see and read more about it at the official Veins site. #2: The Song of Kwasin , a novel by Philip Jose Farmer and Seton Hill alum Christopher Paul Carey , was announced at Farmercon 90 . The novel is a direct sequel to Hadon of Ancient Opar and Flight to Opar . #3: Susan Mallery 's latest novel Sweet Talk is on shelves now. #4: Kimberley A. Opatka-Metzgar , Director of Public Relations for Saint Vincent Archabbey and Seminary and Seton Hill alum designed The Illustrated History of the Schickel Motorcycle written by Ken Anderson . #5: Nica Berry has a new e-book out from Torquere Press titled Hart and Soul . #6: Simply Romance Reviews gave Katherine Ivy's novel Dishonorable Intentions an A+ . You can read the entire review here. #7: Timons Esaias has only a few copies left of his poetry chapbook The Influence of Pigeons on Architecture ,
Post a Comment
Read more

- July 12, 2008
The announcement about Farmercon 90 and Farmerphile 13 is up at The Official Jose Farmer Home Page . Issue thirteen contains my bibliophile on Farmer's novel The Tongues of the Moon . I wrote it from an anthropologist's perspective. Also featured in the issue is fellow Seton Hill Writer Christopher Paul Carey and fellow Magic River blogger Win Scott Eckert . More on The Magic River to come. Until then, it is syndicated here on Live Journal . Heidi Ruby Miller , Philip Jose Farmer , The Tongues of the Moon , Farmercon 90 , Farmerphile , The Magic River , writing , Christopher Paul Carey , Win Scott Eckert , Seton Hill Writers
1 comment
Read more 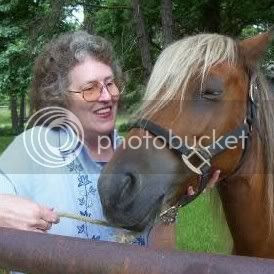 Maryann Miller HEIDI'S PICK SIX 1. Which of your characters is your favorite? Jenny from One Small Victory is right up there at the top of the list just because of the courage it took for her to overcome the darkness of grief and become proactive about the drug problems in her small town. With her, I was able to explore such a wide range of emotions, and often she would surprise me with a reaction to a situation. 2. Tell me about your travels. 3. Coffee, tea, or milk? 4. What else can you do besides write? I can make a mean blackberry pancake sauce. And last year I got brave enough to take a major role in a play and astounded myself and the audiences. Even my friends were surprised. They kept saying, “Gosh Maryann, I didn’t even know you could act.” I resisted the urge to say, “Maybe I’ve been acting all along.”  But, seriously, I love theatre and had always directed shows, tamping down that urge to step on stage. Now I wish I hadn’t waited so long. 5. Who are you readi
4 comments
Read more 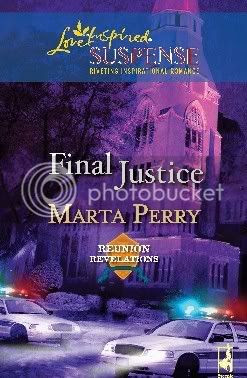 Final Justice by Marta Perry . Goodness, that was a long time ago! I always knew I wanted to write, but it seemed so impractical, so I trained as a teacher instead. But the desire never went away. I was teaching a Sunday school class for six-year-olds when I read the story in the take-home paper and thought, I could do that. I approached it very methodically, studying a lot of examples before trying my own story. When I thought I had something that had a success at selling, I searched through the Writer's Market in the library and made up a list of all the possible markets. The first place I sent it to returned it with a form rejection. The second sent a form rejection with a handwritten note of encouragement on the bottom. The third place bought it for the magnificent sum of $25 or so. I continued writing for those papers, eventually branching out into writing for teen and adult religious publications. Eventually I moved into mainstream magazines, both fiction and non-fiction,
Post a Comment
Read more 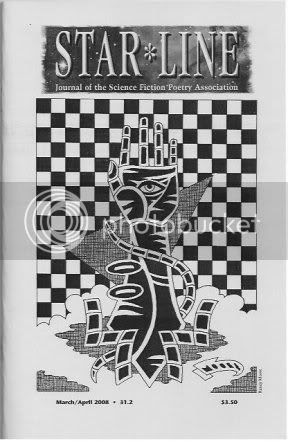 #1: My poem "Misplaced my keys" is in the March/April issue of Star*Line . Star*Line March/April 2008 Issue Also, in that same issue was Fairytale Graveyard , a gift booklet of horror poetry from the SFPA for World Horror Con 2008 . Among the contributors was Seton Hill 's own Michael A. Arnzen with his poem "The Fall Down the Stairs of the House of Usher." #2: In other SFPA news, K. Ceres Wright 's poem "Doomed" was nominated for a 2008 Rhysling Award and is part of The 2008 Rhysling Anthology . #3: Rachael Pruitt 's poem "Merlin" is in Issue 12 of Paradox: The Magazine of Historical and Speculative Fiction . Heidi Ruby Miller , SFPA , The 2008 Rhysling Anthology , Paradox , Misplaced my keys , writing , Michael A. Arnzen , K. Ceres Wright , Rachael Pruitt , poetry , Star*Line , Seton Hill Writers
1 comment
Read more
More posts