During the Burroughs panel last month at PulpFest in Pittsburgh, ERB Director of Publishing Christopher Paul Carey announced that I will be heading the second wave of the brand new Edgar Rice Burroughs Universe (ERBU) which is bringing together all of Burroughs's vast properties (including Tarzan and John Carter) like Marvel did with its characters and worlds in the MCU. Specifics about which character I will be taking over are still heavily under wraps but will be revealed when I am introduced to fans on a panel at San Diego Comic Con 2020. I couldn't be more thrilled and honored. Updates to come. 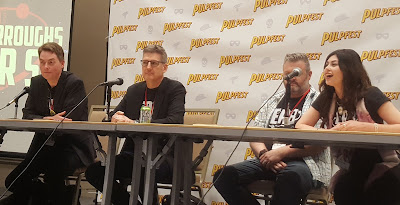