BOOK: A Collection of Nightmares by Christina Sng 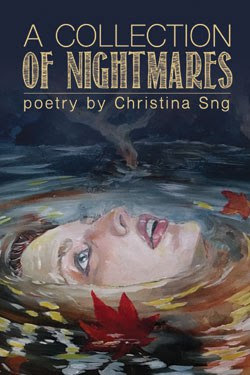 A COLLECTION OF NIGHTMARES

Hold your screams and enter a world of seasonal creatures, dreams of bones, and confessions modeled from open eyes and endless insomnia.

Christina Sng’s A Collection of Nightmares is a poetic feast of sleeplessness and shadows, an exquisite exhibition of fear and things better left unsaid. Here are ramblings at the end of the world and a path that leads to a thousand paper cuts at the hands of a skin carver. There are crawlspace whispers, and fresh sheets gently washed with sacrifice and poison, and if you’re careful in this ghost month, these poems will call upon the succubus to tend to your flesh wounds and scars.

These nightmares are sweeping fantasies that electrocute the senses as much as they dull the ache of loneliness by showing you what’s hiding under your bed, in the back of your closet, and inside your head. Sng’s poems dissect and flower, her autopsies are delicate blooms dressed with blood and syntax. Her words are charcoal and cotton, safe yet dressed in an executioner’s garb.

Dream carefully.
You’ve already made your bed.
The nightmares you have now will not be kind.
And you have no one to blame but yourself. 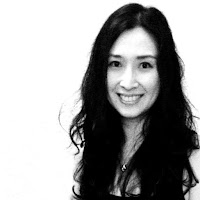 Christina Sng is a poet, writer, and artist. She earned her BA in Criminology and Philosophy from the University of Melbourne and spent most of her career as a web consultant, content producer, UX strategist, and information architect.

Since 2001, Christina’s work has appeared in numerous venues worldwide, especially her poetry which garnered many accolades over the years, most notably nominations in the Dwarf Stars and Rhysling Awards, as well as Honorable Mentions in the Year’s Best Fantasy and Horror.

Her recent collections include A Constellation of Songs, Astropoetry, and Catku. An Assortment of Sky Things, her chapbook of space poems, was nominated for the 2017 Elgin Award. A Collection of Nightmares is her first full-length book of dark poetry.

WHAT THEY’RE SAYING ABOUT A COLLECTION OF NIGHTMARES
“Christina Sng’s A Collection of Nightmares knits a magic quilt of surreal and unique portraits turning the stuff of nightmares and pain into beautiful, even when bloody, images of release and redemption.”
—Linda D. Addison, award-winning author of How to Recognize a Demon Has Become Your Friend

“Participating in a Grand Guignol tradition that traces back to Shelley and Poe…there’s a simultaneously more poignant and more disturbing undertow moving just beneath these spiny surfaces: the notion that, against terrifying events beyond our control, the compassion we carry with us will be our only line of defence, our last light shining through the kindness we show, all the more precious for how briefly it flashes.”
—Mike Allen, author of Hungry Constellations

“This is a book of breathtaking artistry. In verse that ranges widely in subject matter and metrical form, Christina Sng invariably focuses on just those words and images that evoke terror, otherworldliness, and fantasy. But deep emotional resonance is not absent, and Sng can evoke poignancy and melancholy as effortlessly as she can evoke fear and dread.”
—S. T. Joshi

“Christina Sng’s poetry gives me the same feeling as observing a Kandinsky painting or hearing a Nine Inch Nails song: something immediate, deeply complex and intensely profound. It is, in short, a wonder.”
—Jason Erik Lundberg, author of Strange Mammals

“As I read this collection, I found myself exclaiming aloud, for there were so many I could relate to, and that is rare for me. Herein are poems that bite you by surprise, delight you with the weave of fresh fabric…A goodly number are dark SF story capsules, from alien interventions to surviving on a world ruined by mankind. I could not pick a single favorite. I loved them all.”
—Marge Simon, Bram Stoker Award® winning poet

“Each of these fifty or so potent poems are actually stunning little stories about terrifying transformations. Each of the tales she tells are chilling, but her poetic and playful approach spins you around in a vortex of exquisite language and a swirling miasma of wildly terrifying imagination until you yourself are transformed… left dizzy and eager for the next time around. A brilliantly twisted collection, sure to turn a number of heads.”
—Michael Arnzen, Bram Stoker Award-winning author of Freakcidents and The Gorelets Omnibus