BOOK: Storm and Steel (The Book of the Black Earth 2) by Jon Sprunk 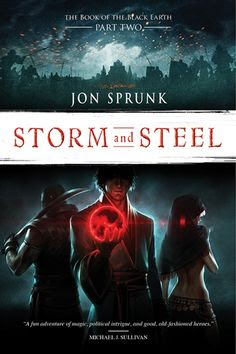 The Magician. Horace has destroyed the Temple of the Sun, but now he finds his slave chains have been replaced by bonds of honor, duty, and love. Caught between two women and two cultures, he must contend with deadly forces from the unseen world.

The Rebel. Jirom has thrown in his lot with the slave uprising, but his road to freedom becomes ever more dangerous as the rebels expand their campaign against the empire. Even worse, he feels his connection with Emanon slipping away with every blow they strike in the name of freedom.

The Spy. Alyra has severed her ties to the underground network that brought her to Akeshia, but she continues the mission on her own. Yet, with Horace’s connection to the queen and the rebellion’s escalation of violence, she finds herself treading a knife’s edge between love and duty.

Dark conspiracies bubble to the surface as war and zealotry spread across the empire. Old alliances are shattered, new vendettas are born, and all peoples—citizen and slave alike—must endure the ravages of storm and steel. 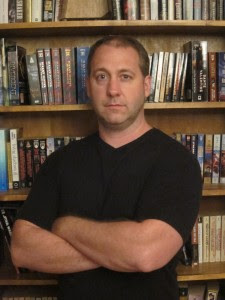 Jon Sprunk grew up in central Pennsylvania. The eldest of four children, he attended Lock Haven University and graduated with a B.A. in English in 1992. Although he had always been an avid reader of speculative fiction, it was during his college years that he developed a broader passion for literature and began his first awkward forays into fiction writing. Encouraged by his professors and peers, Jon set out after graduation to become a “Serious Writer.” Unfortunately, he had failed to notice the specter of Reality stalking at his back. When his disastrous first fantasy novel failed to find a publisher, he bent his knee to the Real World and sought gainful employment. Crushed, he thought his dreams were over.

Over the next decade he married (twice), changed jobs (numerous times), and after much soul-searching, returned to writing. Like most writers, he suspects, he tried to go it alone, seeking to pound his head through the glass ceiling of his innate talent through sheer willpower and effort. Finally, after many more rejections, he joined Pennwriters and attended their annual conference in 2004. Jon is both proud and ashamed to admit that he learned more in those two days about the business of writing than he had in the previous ten years. He was also getting the first inklings of why his fiction had not yet made him a household name. Up till then, he hadn’t known how to fashion a true story.

So,Jon did what any Serious Writer would do. He joined a writers’ group (Pennwriters, to be exact). And he read about the art of writing, a lot. He started to admit to himself that perhaps he could use a little help, that the next Great American Novel wasn’t going to spring from his head, full-grown and ready for world acclaim like some literary Athena.

Since then Jon has seen some success. He has had several short stories published and in June 2009 he signed the first of two multi-book contracts with Pyr Books. And we is adjunct faculty in Seton Hill University's Writing Popular Fiction MFA program. Best of all, he has the love and support of his wife, and that makes all the difference in the world.
blood and iron book of the black earth books fantasy heidi ruby miller jon sprunk pyr seton hill writers storm and steel