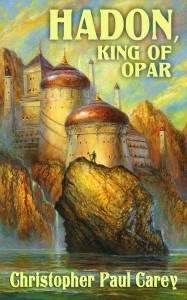 A brand-new tale in Philip José Farmer’s Khokarsa series from Christopher Paul Carey, the coauthor of The Song of Kwasin!

In Hadon of Ancient Opar, the hero Hadon entered the Great Games, battling in the arena for the chance to become king. Instead, he found himself at odds with a vengeful tyrant who sent him on a fool’s errand to retrieve a living god’s bounty. In Flight to Opar, civil war has erupted across the queendoms of Khokarsa, and Hadon must take his quest back to his home city of Opar if he is to fulfill a prophecy of the oracle and protect his loved ones and his homeland from utter doom. In The Song of Kwasin, Hadon makes an appearance following the adventures of his giant herculean cousin, surveying a world torn asunder by a continent-wide earthquake. Now, in Hadon, King of Opar, fourteen years have passed since the great calamity threw the mighty queendoms of Khokarsa from their foundations, and Hadon is king of Opar, charged with protecting his far-flung jungle city against the myriad dangers that threaten it.

Christopher Paul Carey, coauthor with Philip José Farmer of The Song of Kwasin and the author of Exiles of Kho, picks up Hadon’s tale of adventure in exhilarating fashion. Using Farmer’s own notes, Carey now continues the epic saga of Khokarsa, filling in the missing history of a civilization lost to the mists of time…

Opar, legendary city of gold and fabulous treasures, once shined as the most precious jewel of Khokarsa, a mighty empire whose magnificent cities stretched across the shores of ancient Africa’s vast inland seas. But a horrific cataclysm has shattered the other great metropolises of the land and the bountiful seas have slowly begun to drain. Now golden Opar stands alone—the last bastion of a dying civilization, battling to survive in a hostile and rapidly changing world.

When a mysterious enemy strikes from out of the wilds, King Hadon must lead his golden city against the most perilous threat it has ever faced. As he embarks on a mission to confront the danger, Hadon runs headlong into a maze of plots and intrigues lurking in the ages-old tunnels deep beneath the city. Soon he discovers the ancient war between the followers of the goddess Kho and the sun god Resu never truly ended. Unless Hadon can rally his most daunting enemies to fight by his side and rescue his daughter La from the clutches of a ruthless pirate lord, the city of gold and jewels will soon lie in ruins, the long-held prophecy of its greatness hurled into oblivion… 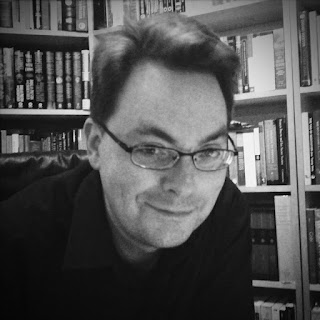 Christopher Paul Carey is the coauthor with Philip José Farmer of The Song of Kwasin, and the author of Exiles of Kho and the forthcoming Blood of Ancient Opar, all tales set in the lost civilization of Khokarsa. His short fiction may be found in anthologies such as Tales of the Shadowmen, The Worlds of Philip José Farmer, Tales of the Wold Newton Universe, and The Avenger: The Justice, Inc. Files. He is a Senior Editor at Paizo on the award-winning Pathfinder Roleplaying Game, and has edited numerous collections, anthologies, and novels. He holds a master’s degree in Writing Popular Fiction from Seton Hill University. Chris and his wife Laura live in Seattle, Washington. Visit him online at www.cpcarey.com.