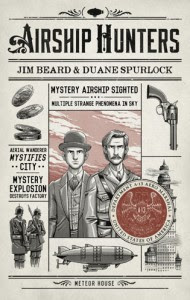 A thrilling novel of turn-of-the-century intrigue and mystery!

It is 1897 and the skies are haunted by mysterious airships and unfathomable secrets.

Tasked with hunting down these strange vehicles of the air and determining their origin and intent, two U.S. government agents toil under unusual conditions to supply their shadowy superiors with information. But that information proves to be as elusive as the airships themselves.

Ride with Agents Valiantine and Cabot across the Midwest as they encounter reports of strange lights, phantom soldiers, unreliable witnesses, and the ultimate source of their airborne prey.

They are the Airship Hunters, and they cannot be waylaid from their path to uncover the greatest mystery of them all.

Jim Beard hunts the biggest of all game: good storytelling. With years of comic book collecting and obsessive amounts of science fiction, fantasy, and pulp reading under his belt, he frequently startles his Northwest Ohio neighbors with his constant muttering and note-making. Beyond that, Jim’s works include Sgt. Janus Spirit-Breaker, Monster Earth, Monster Aces, the Captain Action pulp novels, and Gotham City 14 Miles, a comprehensive look at the 1966 Batman TV series.

Duane Spurlock comes from a long line of long-winded storytellers and near-sighted doodlers. He writes in a number of genres and occasionally illustrates books, including Brian J. Showers’ The Bleeding Horse and Other Ghost Stories, which won the 2008 Children of the Night Award from The Dracula Society. He lives with his family in Kentucky, where they garden, whistle, read folktales, and tell one another stories when not climbing bean stalks and hunting trolls.
airship hunters books duane spurlock heidi ruby miller jim beard meteor house pulp fiction science fiction science fiction adventure