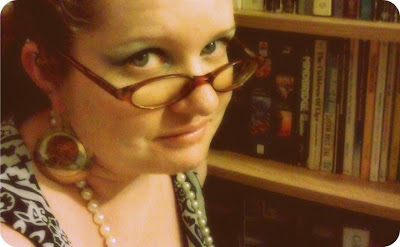 Samantha Holloway
1. Which of your characters is your favorite?

2. Tell me about your travels.
When I was a baby, my dad got a job as a teacher for the Department of Defense Dependent Schools--DoDDS. We moved to Turkey before I was three (my sister was born there and my brother was born right before we left). Then Italy before I was four, Japan when I was six, Scotland at eight, and back to the States when I was eleven. I had no idea how to be American! This is a weird country! Since then, I've been to several states, Canada, and a glorious two weeks in London for a mini-study-abroad. I try to travel as much as possible, but it's not nearly enough to keep back the wanderlust! One of my favorite things is just wandering around some old part of a new city and eating things I've never eaten before!

3. Coffee, tea, or milk?
Tea! I drink at least one cup almost every day (though after I was keeping warm all winter with up to eight cups, I've had to cut back for a bit!), usually unsugared, though sometimes British style when I'm feeling homesick.
I love the smell of coffee, but after I worked at a cafe for two years in undergrad, and lived off the stuff, I just have very little tolerance for the acid and caffeine. Also I'm way snobby, and no one lets me clean and work the espresso machines myself!

5. Who are you reading right now?
This minute, I'm reading Seriously Wicked by Tina Connolly for review, and it's quirky in a way I'm really liking. I've got Cassie Clare's The Bane Chronicles lined up for next, and then maybe one of the stack of travel memoirs or poetry books I picked up from the last library book sale!

11. What kind of music speaks to you?
I don't usually outline. I don't like feeling hemmed in, and if I write it all out it feels like I've already written it and makes the actual writing feel like repetition. What I mostly do is break it down into arcs, then after each day's writing, list three or five things I can do the next day.

If I do make an outline, it's because I'm doing an intensive project like NaNoWriMo (which is fun but usually somewhat disastrous because it's too fast--I missed literally half the needed plot in my last one and I'm still wrestling with it!), and then I make the barest skeleton of an outline to leave space for inspiration and magic!

13. Celebrity crush.
Oh god, I'm like that girl on Teen Girl Squad--"I'm in love with all the boys!" Right now, my top five are David Tennant, Tom Hiddleston, Benedict Cumberbatch, Aaron Stanford, and Chris Hardwick. I love a good cheekbone, an expressive face, and a goofy smile.

14. Who are the biggest influences on your work?
Anne McCaffrey's Pern books were the first things I read that made me go "damn, I need to write a thing", and I did and it was awful, but I never stopped writing since that day!

I've read almost every book Robin McKinley and Neil Gaiman have ever written, and I'm working on getting my grubby paws on the rest. I love Cassandra Clare, Jim Butcher, and Jasper Fforde's stuff is awesomely mind bending.

When I started out, though, I think I was more influenced by Narnia and a hundred 80s fantasy movies. Now I've got two writing degrees adding literary theory and lots of classics I don't like to the mix! I mean, who decides on what's a classic? So many of them are the opposite of how I want to write! 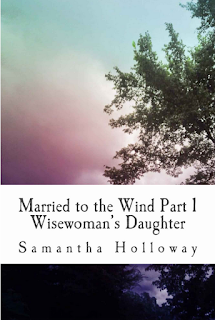 Samantha Holloway is unfit for anything but writing expansive fantasy and the occasional science fiction story, so she does it full time. She's the author of the new epic fantasy novel Married to the Wind, and has published dozens of book reviews, TV reviews and a few short stories. In between writing and thinking about writing, she lives in North Carolina with a cat aptly-named Ninja, wears too much jewelry, runs a home made nail polish company for a lark, and subsists mostly on tea. Find her at Herding the Dragon.