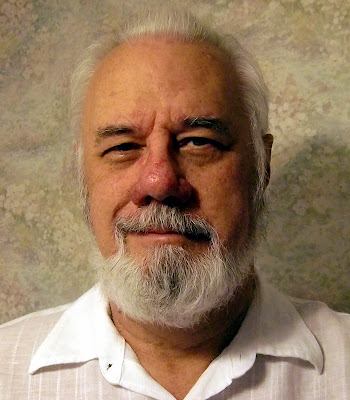 FRED ADAMS, JR.
1. Which of your characters is your favorite?
That’s like asking which of my children is my favorite. I’d have to say Mister Smith, henchman of the arch villain The Whisperer in my novel Hitwolf. Mister Smith is murderously evil and jovially enjoys every minute of it. He is a tall, snaggle-toothed hunchback who has apparently been wearing the same brown suit for twenty years and has never taken it off long enough to send it to the cleaners.

4. What else can you do besides write?
I am a working musician; I have played the guitar since 1958 when I started taking lessons and have been playing in bands and solo since 1963. I also perform annually at the haunted attraction Castle Blood and at the Pittsburgh Renaissance Festival under the monicker Cedric the Balladeer.

6. Pop culture or academia?
Despite my degrees and academic career, pop culture hands down. Love the cheap, trashy thrills.

7. What is the toughest scene you ever wrote?
The toughest scene for me was one in a story I wrote for an anthology of new Sherlock Holmes stories in which Holmes explains to Watson (and thus to the reader) the issue of causality related to time travel. The problem was maintaining reader interest while presenting ideas essential to Holmes’ deduction; I didn’t want it too talky. I set the discussion over breakfast and interspersed the dialogue with the mechanical side of dining (sawing at a sausage, pointing with a jam-laden table knife, etc.).

12. Do you outline your stories or do they just take you along for the ride?
I usually know how they start and how they end. My stories have a tendency to fill the space between organically as I play with the characters and ideas present themselves.

14. Who are the biggest influences on your work?
The pulp writers, Shakespeare, and the Romantic poets: Byron, Shelley, Keats, Blake, Wordsworth and Burns.

Fred Adams, Jr. is a lifelong Western Pennsylvania native who started writing fiction when he was six years old and finally was published at the tender age of twenty. Since then he published over forty short stories (almost exclusively horror and science fiction) in amateur and professional publications plus hundreds of newspaper features as a staff writer for the (now) Pittsburgh Tribune Review. Now retired from his job as an English Professor for Penn State University, Fred is able to devote his attention to what he’s always wanted to do: write.

Two of his novels, Hitwolf and Six Gun Terrors: Volume One were published by Airship 27 Productions and three more, Dead Man’s Melody, Six Gun Terrors: Volume Two, and Monsters and Mobsters: the Adventures of C. O. Jones are due out from Airship 27 over the next year. In addition, he writes genre stories for Airship 27’s many new-pulp fiction anthologies. His story “Masks” recently appeared in Laurel Highlands Publishing’s horror anthology Moonshadows and his story “Astrotrash” will soon appear in LHP’s science fiction anthology Across the Kármán Line. Fred’s novella The Chaos Spawn has recently been re-released after being out of print in a 40th anniversary special edition on Amazon Kindle.

Fred is also a professional guitarist who performs with bands and as a solo singer-songwriter. He has recorded two CDs of original songs, The Doctor is In and Searching for a Vein. Visit Fred’s website: http://drphreddee.com/author 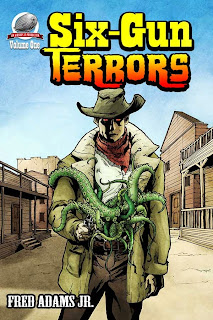 TERROR ON THE PLAINS

Former Union scouts and saddle tramps Durken and McAfee are more than satisfied with their lives as cattle-punchers for Homer Eldridge and his Triple Six ranch. When a mysterious, black clad preacher arrives in town leading a congregation of dwarfish foreigners, strange things begin to happen. First cattle from various spreads are found savagely butchered out on the range for no apparent reason. Then several Triple Six hands go missing.

McAfee begins to suspects there is something very sinister about the new reverend and his people. Something that will bring more horror and destruction with it.

Writer Fred Adams, Jr. spins a weird western tale that will have readers on their edge of their seats and jumping at shadows. Mixing a heady brew that is half H.P. Lovecraft and half Louis L’Amour, SIX-GUN TERRORS is a creepy adventure not soon forgotten. 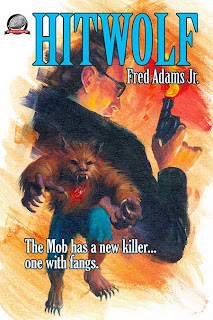 HOWL OF THE WOLF

It is 1969; Newark, N.J. Former Green Beret Jim Slate comes home from Vietnam to live a quiet, peaceful life. His wish is cruelly denied him when he is kidnapped by Michael Monzo, a local gang boss who wants to rule the entire city. To do this he must bring down his rivals.

Monzo recruits an occult practioner who can turn an ordinary man into a vicious werewolf and then control his actions by the use of a magic amulet. But to carry out this heinous plan, he needs a subject. And so Jim Slate is snatched and turned into a “Hitwolf.”

But Slate is no one’s puppet and, despite the curse put on him, he will not be controlled. After he manages to escape his master, Slate disappears into the thousands of acres of New Jersey woodlands known as the Pine Barrens. But Monzo has no intentions of losing his pet killing machine. Now the manhunt begins to capture Jim Slate…dead or alive! 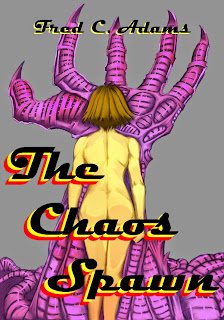 “The secrets of the Universe are here. I can’t stop now. I have to know it all.”

In this modern tale of the Cthulhu Mythos graduate student Harlan Baker discovers ancient evil while cataloging a trove of antique books donated to the Wakefield college library by the estate of an eccentric alumnus. Baker's workmate Carl Barnes becomes obsessed with the project, a sinister stranger arrives claiming that some of the books belong to him, and then young women begin to disappear. Originally published in 1974 and out of print for decades, Fred Adams Jr.'s The Chaos Spawn returns in a special 40th Anniversary digital edition featuring new cover art by the talented Christopher Miller. Read it tonight and leave on the lights.