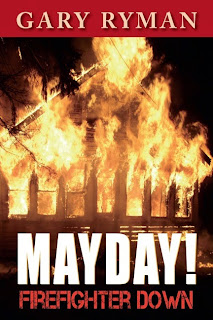 Mayday! Firefighter Down by Gary Ryman

Lieutenant Dave Michaels is a chief officer in the making, according to some, as is his best friend, fellow officer and brother-in-law, Matt Thompson. After an intentionally set fire kills Thompson, Michaels begins to investigate the fire himself, angered by the slow police action. A series of similar fires convinces him that the key lies with the buildings' owner, the ex-wife of his deputy chief. But Michaels' dogged pursuit of the arsonist eventually puts him at odds with his superiors and a gritty, old-school detective named Witkowski. And it's not just his career that's in danger. Michaels' life is also on the line as the arsonist has a plan to permanently extinguish the fireman's burning desire for justice.

Mayday! Firefighter Down by Gary Ryman was released by Hellgate Press in September. The book is available on Amazon in softcover and Kindle versions and also at Barnes & Noble.


What they're saying about the book....

"Gary Ryman is a master storyteller, his intricate details eliciting a full range of emotions as he strategically positions you inside the head and heart of the firefighter feeling the heat, on and off the fire scene."
--Chief Tiger Schmittendorf, Runtothecurb.com

"Mayday! Firefighter Down is a great read in the genre of Dennis Smith's Steely Blue and shouldn't be missed. Ryman kept the firefighter in me interested and the writer in me waiting to see what happens next."
--Deputy Chief Michael "Mick" Mayers, Firehousezen.com

"An incredible read! The Chief has blended just about all of the elements of a great American novel into this one--Mystery, Murder, Greed, A Sexy Love Story and Great Firefighting Action. This book should be required reading for all aspiring and new firefighters."
--Chief Dennis Rubin, former Fire Chief, Washington D.C.

"Ryman hits one out of the park...From the first dispatch to the jaw dropping ending (or is it?), Ryman takes you on a thrilling journey as a Truck Officer in a busy fire station, plagued by an arsonist. Mayday! Firefighter Down is a compelling read; once you start you won't want to put it down!"
--Fred Bales, CFPS, CFI PA Senior Fire/Public Safety Instructor