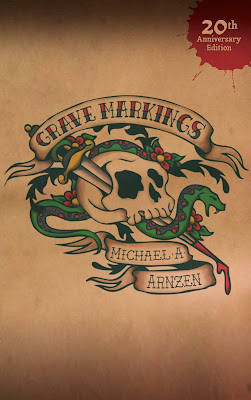 Grave Markings follows the tortured mental breakdown of Mark Michael Kilpatrick—an artist driven to purge visions of hell from his tainted mind by permanently working his ink into the skins of unwilling victims...the flesh of both the living and freshly dead.

News reporter Roy Roberts finds himself drawn into an obsession with tattoo culture, at the same time as Kilpatrick's own compulsions produce sicker and sicker masterpieces that attract media attention, twisting in a spiral that inevitably brings Roberts and his loved ones into Kilpatrick's morbidly perverse universe, and the artist's deadly inkgun turns toward them...

Now, for the first time in trade paperback, readers can find out why this novel won the Bram Stoker Award, the International Horror Critics Guild Award, and such widespread acclaim across the horror genre. Included in this special Twentieth Anniversary edition are 50 pages of insightful BONUS material by Arnzen: a new preface, five literary essays, and four short stories (two never before published) involving bikers, tattoos and terror.

What they're saying about Grave Markings:
"Grave Markings is a high-speed chase into madness, unpredictable and twisted as a mountain road, written by one of the most inventive and outrageous new talents in the horror genre." -- Karl Edward Wagner, Author

"Michael Arnzen's debut novel is garish, unsettling, and darkly beautiful -- just like the artwork of its main character. Like that artwork, it makes a statement that simultaneously fascinates and repels. You want to turn away. You must turn away. But, oh God, you can't. Arnzen's definitely a writer to watch." -- Paul F. Olson, Author

"The ink gets into your blood and the needle goes straight to your bone."-- Jason Jack Miller, Author

"A Horse's Mouth from hell. A piercing look at art's illegitimate underbelly. Michael Arnzen is an excellent writer, and Grave Markings is a uniquely disturbing debut." -- Bentley Little, Author

"Michael Arnzen pulls the reader into the world of Grave Markings with a vivid, surreal hook, then makes it impossible to escape as the nightmares are unveiled. A great thriller." -- Sidney Williams, Author

"An authentically painful read, which conveys a real sense of a mind and a culture dangerously out of control." -- Ramsey Campbell, Author 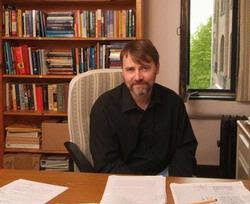 Michael Arnzen is an award-winning author of horror and dark suspense fiction, a poet, and an English professor. His trophy case includes four Bram Stoker Awards and an International Horror Guild Award for his often funny, always disturbing stories. The best of these appear in the Bram Stoker Award-winning career-length retrospective, Proverbs for Monsters, which Dread Central called "a guided tour of insanity and the macabre, with a few moments of touching grace combined with repulsive terror...[which] serves to document the evolution of a great writer."

Arnzen holds a PhD in English from the University of Oregon (where he researched his non-fiction book, The Popular Uncanny) and he is presently a Professor at Seton Hill University, where he teaches horror and suspense fiction in the country's only graduate program in Writing Popular Fiction (http://fiction.setonhill.edu).

Arnzen resides near Pittsburgh, PA, with his wife of many years, Renate, and a brood of deranged cats.

Buy Grave Markings and all of Mike's books at Amazon.