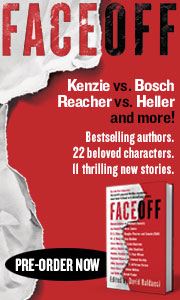 In an unprecedented collaboration, 23 of the world’s bestselling and critically acclaimed thriller writers pair their series characters in an 11-story anthology curated by the International Thriller Writers (ITW) and published by Simon & Schuster.

The stories in Face Off feature such pairings as Michael Connelly’s Hieronymous “Harry” Bosch joining forces with Dennis Lehane’s Patrick Kenzie in the story Red Eye and John Sandford’s Lucas Davenport teaming up with Jeffery Deaver’s Lincoln Rhyme in Rhymes with Prey.

All of the contributors are ITW members. #1 New York Times bestselling author David Baldacci, says, “This is a once-in-a lifetime opportunity for readers. It’s only through ITW that we were able to bring these literary legends toe to toe. I’m honored to be at the helm of this amazing ship.”

Each author has donated his or her story and all of the proceeds from the book go to fund ITW, which charges no dues to its members. “It’s part of what we do, as ITW members,” said New York Times bestselling author, Steve Berry, who will serve as managing editor working with Baldacci.

The full list of contributors is a who’s who and includes:

For a more in-depth look at FACEOFF, check out this article in the June issue of the Big Thrill.