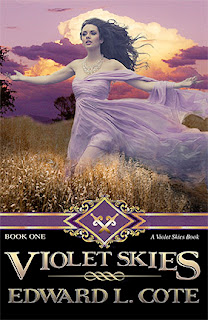 Let's see, path to publication: In a word, "rocky".
I first got the idea for this project a long time ago but didn't start seriously working on it until relatively recently. Even then I had trouble working to a point where I had both the time to write and the resources to get a cover (which does look great BTW, thanks to Tara) editing, formatting, and other services. Right now I'm very busy. I've gone back to school and I'm going through some changes in my personal life that while are in themselves difficult, will give me more clarity, tranquility, and independence, and hopefully make it easier for me to write.
I've had a productive year and I'm looking forward to another. I want to get Book Two published next fall. If I have it ready in time I might even take it to Gen Con! I've learned a lot but I have a lot left to learn.
I wouldn't have it any other way.
--Edward L. Cote
December 2013

Edward L. Cote grew up in Kansas and went to college in Lawrence, where he still lives. He likes to travel, cook, have good conversation with good friends and have a D&D game with friends that meets every other week.

He grew up on science fiction and fantasy in a time when Return of the Jedi was in theaters and Star Trek TNG seemed like the coolest thing on television. In his school years he read the entire Dune series, Ender's Game and all the sequels, as well as Orson Scott Card's Homecoming series, and several others. In college he discovered Roger Zelazny's Amber and Robert Jordan's Wheel of Time, and more recently George R.R. Martin's Song of Ice and Fire.