"Lee Allen Howard's DEATH PERCEPTION is a red hot union of Gothic crime thriller and grim humor that burns with supernatural tension. Beneath the sickly sweet scent of caramelized sugar lies the wildly entertaining tale of a man who delivers justice to the dead while fanning the fires of the living. Ever hear the expression, 'laughing in a morgue'? DEATH PERCEPTION feels just like that. Howard has a gift for crafting eccentric characters and clever plots. This is dark fun at its best."
--Jason Jack Miller, author of The Devil and Preston Black and Hellbender 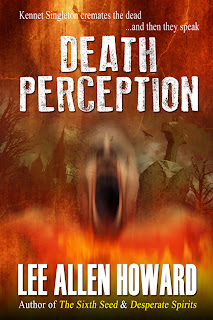 Available in Kindle, Nook, and in trade paperback

DESCRIPTION:
Kennet Singleton cremates the dead... and then they speak: "Avenge us!"

Nineteen-year-old Kennet Singleton lives with his invalid mother in a personal care facility, but he wants out. He operates the crematory at the local funeral home, where he discovers he can discern the cause of death of those he cremates--by toasting marshmallows over their ashes.

He thinks his ability is no big deal since his customers are already dead. But when his perception differs from what's on the death certificate, he finds himself in the midst of murderers. To save the residents and avenge the dead, Kennet must bring the killers to justice.

"Dastardly devious, cleverly conceived, and just a whole lot of fun to read, DEATH PERCEPTION is Lee Allen Howard on fire and at his finest. Rife with winsome weirdness, it's like the mutant stepchild of Carl Hiaasen and Stephen King, mixing a truly unique paranormal coming-of-age story with a quirky cast of offbeat noir characters into a novel that's simply unforgettable... and hilariously original. A supernatural crime story, blazing with creative intrigue... don't miss it."
--Michael Arnzen, author of Play Dead

"DEATH PERCEPTION has officially made me envious of Lee Allen Howard. It sings like a choir of angels, yet weeps like a ghost in winter. Everyone should have this in their collection.”
--Trent Zelazny, author of To Sleep Gently and Butterfly Potion 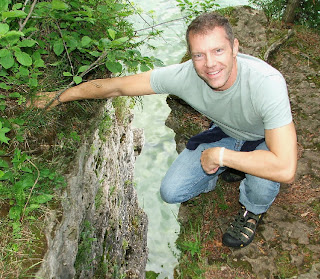 Lee Allen Howard writes horror, dark fantasy, and supernatural crime. He’s been a professional writer and editor of both fiction and nonfiction since 1985. His publications include The Sixth Seed, Desperate Spirits, Night Monsters, “Mama Said,” “Stray,” and Death Perception, available in various formats at http://leeallenhoward.com.