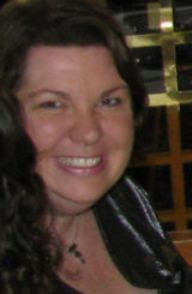 Daphne J. Riordan
1. Which of your characters is your favorite?

2. Tell me about your travels.
I totally have the travel bug! I was an Army brat growing up, and when I was little we lived in Germany for three years. My parents wanted to take advantage of our location--Europe! No airfare!--so we did a lot of traveling and managed to get to most of Western Europe. (It was the middle of the Cold War, so going to Eastern Europe was another thing entirely.)

Later, in High School, my family traveled to England, Scotland and Ireland--we'd gone there when we lived in Germany, but it deserved a second trip. And in college, I traveled across the southern part of the U.S. with my mother then spent three weeks on the Navajo reservation in Tuba City, Arizona.

Since venturing out on my own after college, I've gone on a cruise around the Mediterranean, spent a week in Madrid, traveled around England looking at Regency-era sites (and dancing in Bath!), driven to the Black Hills area of South Dakota and seen Mount Rushmore, visited Disney World, rode on an elephant in Thailand, and cruised up the Alaskan coast then took a train into the interior. My most recent journey was to the Oregon Coast a few weeks ago.

3. Coffee, tea, or milk?
Tea. I don't like coffee and am allergic to milk (although I loved it when I was little). It's only been in the last year or so that I found a tea I like enough to drink regularly--Celestial Seasoning's Bengal Spice. Kind of like chai without the latte. I add liquid stevia to make it a little sweeter.

But I mostly drink water.

4. What else can you do besides write?
My day job is in computers--I'm a data architect. That basically means I design, build and maintain the database structures needed to store and manage data for the various applications in our company. In addition, I can do some basic coding in languages like C, Perl, and a tiny bit in Java, as well as PHP and HTML on my websites.

5. Who are you reading right now?
I just started Jennifer Estep's Mythos Academy series, and I'm really enjoying it. I'm on the second novel--Kiss of Frost. I tend to read many books at once, so in addition to Kiss of Frost, I'm also reading Inside Out by Maria Snyder, Silver Shark by Ilona Andrews, Entangled (an anthology), and Eve by Anna Carey. All of them very good. Oh, and I'm reading a couple of books about data warehousing for the day job.

10. Are you into sports or other physical activities?
I minored in dance in college, which is part of why I have a seemingly random subdomain on my website devoted to the history of dance. All in all, I danced ballet for eighteen years, along with a few other forms of dance--but mostly ballet.

More recently, I've gotten into strength training and have been working with a personal trainer. I love working on the weight machines at the gym.

12. Do you outline your stories or do they just take you along for the ride?
When I first started writing, I was a pantser. Then after a few books, I started thinking outlining might be the better way to go, so I outlined the next few books. But recently, I've been thinking it would be fun to pants it again, so that's what I'm doing with my current book. I think there are benefits and drawbacks to both methods. I think in the future, I'll make a decision book by book as to which way to go. Some types of books--mysteries, for instance--seem to lend themselves more to outlining, since you need to lay out all the clues and red herrings and have them all end up at the solution, while other types of books don't need that as much.

Daphne J. Riordan wrote her first novel at the age of twelve, long-hand. It was the story of a girl who had visions about an apocalypse, and her efforts to save her friends by getting them all to a magical island in the Pacific. Daphne would sit with her friends at lunch in sixth grade and write the story, because they insisted on seeing the next page as soon as possible.

Since then, she has written many other stories but never strayed too far from her love of fantastical worlds and scientific explanations. She eventually earned a Master's in Writing Popular Fiction from Seton Hill University, with her novel Legacy of Blood as her thesis novel.

She lives in Minnesota with her cat Katniss.

Find Daphne online at these links: 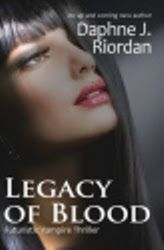 DESCRIPTION FOR Legacy of Blood:
A future built by the survivors of a pandemic.

In a post-apocalyptic world twenty years after a pandemic wiped out a third of the population, data analyst Jackie Fournier searches for the location where the disease first appeared. The job has personal meaning for her; the pandemic killed her little sister.

A country ruled by a dictator.

When certain factions in the government find out what Jackie's been hired to do, they send assassin Nash Kerns to stop her. If she doesn't stop digging when the project is shut down, he has orders to kill.

Buy Legacy of Blood online at these links: