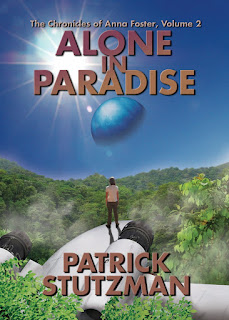 After I finished my game designing gig for the Star Wars Roleplaying Game, Saga Edition for Wizards of the Coast, I wanted to keep my writing skills sharp. I had already written a number of short stories for the sole purpose of honing my writing style and felt like I was ready to embark on a larger, more serious work.

During one bus ride to work in the summer of 2009, I began brainstorming and came up with the idea of writing a story about a woman left alone on a space station in the middle of nowhere. Three months, several bus rides, and a stolen laptop later, the first novel titled Alone on the Edge was complete.

I could have stopped at that point and started peddling my work to potential agents and publishers, but I felt that I had more story to tell about my main character. I kept writing. Despite a grueling work schedule, I finished the draft for Alone in Paradise three months later.

Two books under my belt, and I still wasn’t done! I kept writing and got about 25,000 words into the third book titled Alone in the Crowd, when I decided that I should probably stop and see if I can get the first book published before continuing.

I shifted gears and began the search for an editor. Who knew that I would find one right around the corner from me? One of my coworkers proved to be a valuable resource as an editor and has saved me a LOT of headaches. I cannot thank her enough. But after Edge was edited, I continued on my quest for publication and sent query letters to countless literary agents and publishers. Several months passed, and I received letter after letter rejecting my work. I could not understand why, since I was figuring that my experience writing for Star Wars would be a sure thing in being accepted. They proved me wrong!

GIVEAWAY: One lucky person who comments on this post before the end of September 2012 will receive a FREE ebook copy of Alone in Paradise – this is open internationally!

Buy Alone In Paradise at these links: