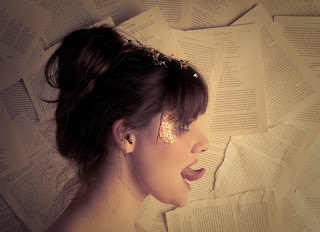 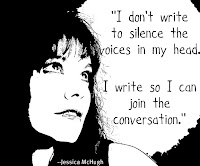 1. Which of your characters is your favorite?
I love almost every character in my alternate history story “The Sky: The World,” but to make things easier, I’ll choose Captain Jack Racine as my favorite of the bunch. If Indiana Jones were addicted to laudanum and had to be coerced into adventures by loading him up with liquor and lovely ladies, he’d be Jack Racine. The guy’s a bit of an asshole, but he’s that magical kind of likable,too. He’s perfect for fantasizing about, but you’d be an idiot to try to date him.

4. What else can you do besides write?
I can sing, mostly Broadway songs. In high school, I was in musicals and show choir—we even performed at Carnegie Hall. Unfortunately, there is little chance for me to sing nowadays, except in the shower. I try to get to karaoke as much as possible, but I always seem to be busy on the days the nearby bar hosts it. It’s a shame, really. I need to take more time to punish people with my voice.

6. Pop culture or academia?
I’m a pop culture nut. Even with easy access to the internet, friends still call me to ask, “Who was the actor in ____?” or “What movie has the line ‘You want to have, like, ten thousand of his babies.’” I’m also a good person to have around if you want to know whether a certain actor was ever in a 90s TV show on Nickelodeon. Lots of “Are You Afraid of the Dark” actors made it to the big time. I hope they credit that show for their fame—especially Ryan Gosling. However, my forthcoming novel "PINS" is the first book I've written that really embraces that pop culture part of me, notably "Disney's Gargoyles."

7. What is the toughest scene you ever wrote?
There have been a handful of tough ones in the past few years, but I think the roughest was at the end of “PINS.” I was very disturbed by the subject matter, so much so that I had nightmares. Not only about the disgusting stuff I was writing but also about what people would think of me when they read it. It took a few weeks to knock out a 10 page scene—I took many sojourns into my YA novel “Darla Decker Hates to Wait” just to escape the dark, disgusting “PINS” world. The worst had to be hearing the torturous scene during my auditory revision of “PINS.” I remember cringing behind a giant glass of wine as the computer read it aloud.

12. Do you outline your stories or do they just take you along for the ride?
It really depends on the story. Because I regard each book as a different animal, they require different care. A lot of times, I have a basic skeleton of a story in mind, at least up to the middle, but I’ll write whatever comes to mind. Then, I’ll reach a point at which I’ll stop and say, “Okay, where is this going? What do I want this story to say to the audience?” I often plan out the final chapters at that point, but I’m not immune to deviating from the plan. The characters are running the show, not me. I find that trying to make characters do what you want is a good way to write a bad story.

13. Celebrity crush.
Ewan McGregor has been #1 on my Top 5 since I can remember, but I’d be remiss not to mention Kevin Spacey. While high school girls were mooning over Brad Pitt, I was lusting after Kevin Spacey. Weird, I know. I just thought he was really talented and had a beautiful smile. The subject will actually be covered in my novel “In the Car with Bobby Starr,” which I’ll be writing next winter.

Jessica McHugh is an author of speculative fiction that spans the genre from horror and alternate history to epic fantasy. A prolific writer, she has devoted herself to novels, short stories, poetry, and playwriting. She has had eleven books published in four years, including the bestselling "Rabbits in the Garden," "The Sky: The World" and the first three installments in her "Tales of Dominhydor" series. More info on Jessica's speculations and publications can be found at JessicaMcHughBooks.com. 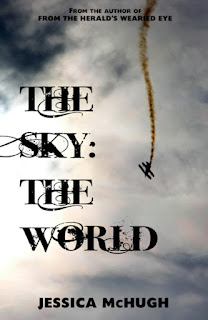 DESCRIPTION FOR The Sky: The World:
Who is Doctor Azaz? It is the 19th Century, and Azazian England is at it's pinnacle. Aeroplanes rule the sky, and crystalline technology has transformed life itself. But for stunt pilot Jack Racine, life is little more than an endless tailspin into liquor, laudanum, and loose women. But all that is about to change. For Jack Racine is about to have an audience with the architect of the age, the mysterious Doctor Azaz... 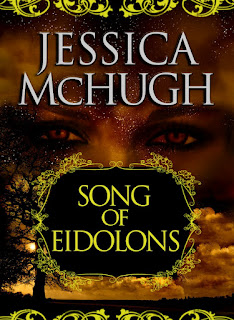 DESCRIPTION FOR Song Of Eidelons:
Delaney Lortal is a unique breed of girl. She is well spoken, extremely well read, and highly ambitious for love, but it is not those qualities that make her so unique. It's not even because in twenty-two years of life, she has never set foot outside of her grandfather's house. What makes her so unique is the truth behind a mysterious secret that has made her the target of a clandestine Order called the Orisanima. As wondrous as it is heartbreaking, Song of Eidolons follows Delaney's journey of enlightenment as she struggles to peel back the layers of deceit to discover the amazing truth about her origins.
author interviews heidi ruby miller heidis pick six jessica mchugh song of eidolons the sky the world