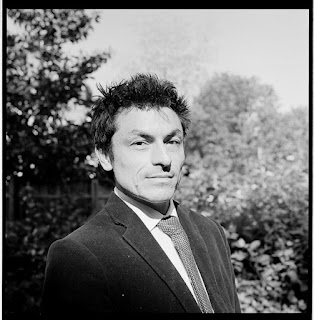 Leland Pitts-Gonzalez
1. Which of your characters is your favorite?
I think my favorite character in the book is the daughter, Sylvia. As the writer, I was able to develop a lot of empathy for her; plus, in the beginning, she’s very rambunctious and rebellious, morphs into someone who is more introspective, but still has a lot of verve. Sections which involved her were a lot of fun to write because I allowed myself the freedom of messing with the language, as well as mimicking her internal voice. She seems to be the smartest, most empathetic, and most humane character in the novel.

2. Tell me about your travels.
Ah, jeez. I have traveled to very few physical places, and with even fewer physical people. I did, though, discover myself in a trance while traipsing through the Duomo di Firenze; full of rage in the hot-springs of some remote out-birth of a Canadian province; and being kicked out of a restaurant in Rome simply for saying "hi." Do trips across time, space, and my childhood backyard count? How about encounters in Queens, NY?

4. What else can you do besides write?
I’m one of the great empathizers of our era. I cannot, however, juggle fire while thinking; walk in a straight line unless tethered to my inimitable, faceless, and enraged “OTHER”; and cannot stay awake long enough to fall asleep—stuck in this meager, half-lit spleen of a life my religion has deemed "OUR FAMILY ROOM," but is usually envisioned by the masses as a "CREAMY GREASE-MARKED AND BLOODIED HEAVEN."

5. Who are you reading right now?
I was rereading a book called THE BLOOD POETRY, but got sick of it. So, I moved on to Michel Houellebecq’s new novel THE MAP OF THE TERRITORY.

6. Pop culture or academia?
Pop culture in academia! Both kind of suck. Is there a fringe culture any longer? There are no genuine maniacs anymore. It’s so hip to be a killer, and even better to study that mass murder, pierced, tattooed, dangerously nostalgic, and faux youth culture. We need to get back to ORIGINAL SIN.

7. What is the toughest scene you ever wrote?
Truly comic and intelligent scenes are difficult. Also, crafting scenes where characters display sincere affection for each other is almost impossible. Why is that?

8. Where do you find your inspirations to write?
I write about where, and to what, my mind wanders. I consistently find myself in gauzy, cubby-hole universes during my conscious life. Sometimes I dream about the living; but I also bump into the walls of dreamers while awake. Have I met you before, or was that just last night in my head? Neighbor, didn’t that fence impale me and then you? I take suggestions and transcribe the meanderings of a brain genetically predisposed to screwing up the Rorschach. I’m forced to simply edit my inkblots enough to make them amenable (entertaining?) to an imagined public.

10. Are you into sports or other physical activities?
Eh, used to watch quite a bit of baseball. I lost interest, though. And then I started doing Kiyokushin karate at a dojo in Queens, NY. I had no idea that it is one of the most combative forms of the sport—which, of course, fed my dream to finally be a bad-ass. I was absolutely terrible at it—I mean, totally uncoordinated. Imagine Woody Allen or Jerry Lewis mastering the graceful and lethal strokes of the sport. Yet, I persevered! Persevere is one of my middle names. Well, I eventually quit.

11. What kind of music speaks to you?
I have varied tastes in music—from 80s hardcore and post-punk, to 70s electronica, some industrial, and am very particular about jazz (mainly the work of John Zorn). I’m also keen on depressing neo-folk music, like Matt Elliot.

Leland Pitts-Gonzalez studied Creative Writing and Ethnic Studies at San Francisco State University where he discovered the enormous possibilities of poetry, experimentation, and critical theory. He eventually earned an MFA in Writing from Columbia University on a merit fellowship. He has published fiction in Open City, Fence, Dark Sky Magazine, Drunken Boat, and Monkey Bicycle, among other literary journals. He is also the project director for an upcoming literary event series, Phantasmagoria, for which he received fiscal sponsorship from the New York Foundation for the Arts. He lives in Brooklyn, NY.

DESCRIPTION FOR The Blood Poetry:
Is Epstein a despicable man?

He's certainly trying desperately at something. When his wife disappears he's frantic to talk to his daughter. But what can he tell her? There must be a reason and he's all but sure about the gruesome answer. Can he protect Sylvia from the truth, from her terrible lineage and, ultimately, from himself?

Off-beat and sordid, The Blood Poetry is a twisted, yet honest look at our desire to connect with others and the ways in which we are often stymied by our own efforts to get closer. Epstein is a curious mix of monster and romantic struggling to maintain a shred of dignity in his dingy, beat down world.