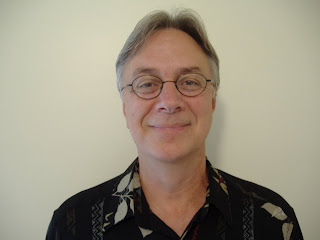 Larry Ivkovich
1. Which of your characters is your favorite?
I'd have to say Kim Yoshima, my protagonist in The Sixth Precept. I originally created Kim in three previous short stories (one of which, "Time Noir," was published in M-Brane SF; another "A Concerned Citizen" was a runner-up in the L. Ron Hubbard Writers of the Future Contest and is now available from IFWG Publishing, Amazon and Barnes & Noble as an ebook) so it's fair to say I do like her and wanted to continue her adventures. She’s intelligent, strong, compassionate, has an interest in history and old traditions, but she’s weighed down by these esper/telepathic abilities she’s acquired, didn’t ask for, and is trying to cope with the consequences of using them. She’s an ordinary person thrown into really extraordinary circumstances.

5. Who are you reading right now?
SEEKER by Jack McDevitt. It’s a hard science fiction mystery using the "Lost Colony" trope and is very good. It’s the third in his Alex Benedict and Chase Kolpath antiquity dealers series. I had overdosed on a lot of urban fantasy lately and needed a shot of good old Sci-Fi.

7. What is the toughest scene you ever wrote?
The members of the two writing/critique groups I belong to, the Pittsburgh SouthWrites and the Pittsburgh Worldrights, tell me I write good action scenes but those are the hardest for me to write. I really have to concentrate and try to visualize how the fights, battle scenes, chase scenes, etc. go together and if they’re even physically possible. I was pinged by the SouthWrites for a scene I wrote as violating the laws of physics where my character made this incredible diving, twisting, turning leap to save another character. So, I’d have to say it’s never been one scene individually but action scenes collectively that are tough for me to write.

8. Where do you find your inspirations to write?
A lot of what inspires my writing on a fundamental level comes from growing up reading comic books and watching television in the 1960s. I tend to give my characters special powers, not necessarily super powers, but ones of deduction or stealth or some sense or ability all of us possess but haven’t fine-tuned or use much. The action scenes I watched in shows like "The Wild, Wild West" or "The Man From U.N.C.L.E" have stuck with me over the decades. Certain current events or historical periods (like medieval Japan in The Sixth Precept) or medical/scientific discoveries also inspire me. I wrote a short story called "About Face" a few years ago that was published in a Scottish horror anthology called Raw Terror. It was about a woman suffering from Prosopagnosia or “Face Blindness” where she couldn’t recognize facial features, even on herself when she looked in a mirror. It’s an actual neurological condition I had read about in a magazine and wrote a story where, even though my protagonist can’t really "see" people’s faces, she’s able to see other things--things that aren’t of our world.

12. Do you outline your stories or do they just take you along for the ride?
I go along for the ride. I’ve tried outlining but it just doesn’t work for me; I’m just not that organized. I do jot down notes when I get a story idea and will refer to them but I usually just start writing and see where it takes me. The incidence of a writer’s characters taking on lives of their own happens to me a lot. I do a lot of rewriting so things do change in the body of the piece during that process--add text, delete text, move chapters around, etc. Most of the time this method works for me but I have several unfinished short stories and an unfinished novel waiting to be completed because I didn’t know how to finish them. I just ran out of steam!

14. Who are the biggest influences on your work?
Andre Norton, Edgar Rice Burroughs and Ray Bradbury initially. These authors were the big three I grew up with and still love reading today. I can never attain their levels of excellence and uniqueness (who can?) but their individual styles do creep into my own writing from time to time--Norton’s fantasy world building, Burroughs’ action and hybrid beasties, Bradbury’s descriptive brilliance. More recently William Gibson’s early cyber-punk and recent contemporary-noir sensibilities have fired my imagination. These four aren’t the only writers I admire but they’ve helped shape my own writing more than any others. If I could write something a third as good as any of them, I’ll be happy!

IT professional Larry Ivkovich is the author of several science fiction, fantasy and horror short stories and novellas, published online and in various print publications and anthologies including M-Brane SF, Afterburn SF, Twisted Cat Tales, Penumbra, Abaculus III, Raw Terror, Triangulations and Aoife’s Kiss Shelter of Daylight. He has also been a finalist in the L. Ron Hubbard’s Writers of the Future contest and was the 2010 recipient of the CZP/Rannu Fund Award for fiction. His debut urban fantasy novel, The Sixth Precept, is now available from IFWG Publishing and amazon.com and barnesandnoble.com. He is a member of two local writing/critique groups, the Pittsburgh Southwrites and the Pittsburgh Worldrights, and lives in Coraopolis, PA with his wife Martha and cats Trixie and Milo. 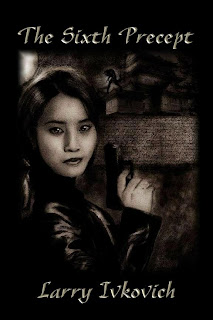 DECSRIPTION FOR The Sixth Precept

In 16th century medieval Japan, Yoshima Mitsu, who is gifted with psychic powers, uses her prescient abilities to send her young attendant, Shioko, into the future. There, Mitsu believes Shioko will be safe from the purges of the maniacal warlord Omori Kadanamora, his warrior monks and his half-human, half-bestial Shadow-Trackers.

In present-day Pittsburgh, police Lieutenant Kim Yoshima is attacked by a creature out of someone’s twisted nightmare. In the aftermath of that terrifying struggle, Kim finds a young Japanese girl named Shioko, lost, confused and calling Kim “Mitsu” and her monstrous attacker a “Shadow-Tracker.”

Wayne Brewster dreams of the costumed hero, ArcNight. But more than that, he feels bizarrely connected to the fictional crime fighter as if ArcNight and his comic book world are real. And in all of his dreams, Brewster sees one constant, one face repeated over and over--the face of Kim Yoshima.

Empowered by a mysterious book, The Five Precepts to Enlightenment, Kim realizes her destiny is in the past. Using her own burgeoning esper powers, Kim, accompanied by Shioko and Brewster, travel by means of a temporal rift to feudal Japan. There they must assume different personas to fight Omori and creatures of Japan’s mythological world to fulfill ancient prophesy and modern historical fact. If they fail, history will be altered and the world will change forever.