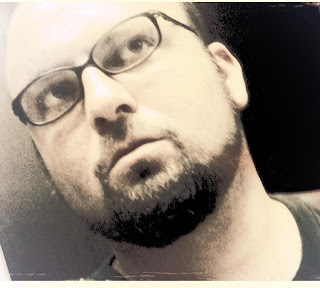 Ennis Drake
1. Which of your characters is your favorite?
2. Tell me about your travels.
3. Coffee, tea, or milk?

4. What else can you do besides write?
I've drawn my whole life; I was determined, pretty much from the time I could hold a pencil to paper, that I was going to become the next Steve Ditko, and then the next Frank Miller, Todd McFarlane, etc..., but I could never make my art meet my standard. I think I was twenty-five, or so, when I hung up that hat and focused on my writing. I still haven't quite given up the dream of comics, though; I scripted a graphic novel a couple of years ago (a sequel to Lovecraft's "The Colour Out of Space") that I've, more or less, been sitting on since I pitched it to BOOM! comics. I have so much going on right now that I probably won't get back to it till next year, but I fully intend to make it happen.

5. Who are you reading right now?
S.P. Miskowski, David Nickle, and Machen.

8. Where do you find your inspirations to write?
I am most inspired when I have deep quiet; when I can hear the overcurrent of my subconscious and can listen without trying to touch it. More often than not, though, I am inspired by my hungers.

13. Celebrity crush.
Ryan Reynolds. I mean, seriously, who doesn't like Ryan Reynolds? Although, I do kind of have a thing for Selma Blair. Rose McGowan? Avril Lavigne?

14. Who are the biggest influences on your work?
Probably the most obvious would be King and Mattheson, Vonnegut, Lovecraft, Michael Moorcock. . .really I absorb almost everything I read.

15. Do you still watch cartoons?
Oh, yeah! Spongebob is quite possibly the greatest TV show ever made. 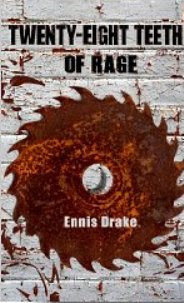 Ennis' debut novel, 28 Teeth of Rage, was released by Omnium Gatherum Media on May 31st.

"28 Teeth of Rage has the bite of a crocodile. Drake tears a hole right through modern horror. This guy isn't on the way; he's kicking in the door."
--Laird Barron, two-time Shirley Jackson Award-winning author of "The Imago Sequence", "Occultation", and "The Croning"

"[28 Teeth of Rage] is a tale of possession and madness, but the kind that any sane person will understand. Drake gets inside the heart and mind of each character and never stops digging for the truth. You know these people. I know them. They have suffered terribly, and they are haunted by their loss. At the same time they are the inheritors of the spectacular horrors human beings have hurled at one another throughout our blood-spattered history. This is a hell of a ghost story, one you won't forget thanks to Drake's storytelling ingenuity, but also because it springs directly from our collective well of grief and rage. This animal howl--for justice, for retribution--resonates within us, and is unanswerable."
--S.P. Mikowski, Shirley Jackson Award-nominated author of "Knock Knock"

"A powerful work of horror. Drake's prose beats with a million-mile-an-hour force, propelling you through meat and sinew with a terrifying bite. This is not a work for the weak, for the timid. With beautiful language and raw power, Drake takes you on wrenching journey into our worst desires. A propulsive read by a fantastic new voice in the genre, one you're likely to never forget."
--Simon Strantzas, author of "Nightingale Songs"