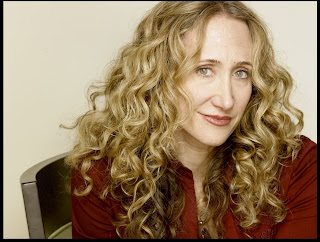 1. Which of your characters is your favorite?
I have a favorite in every book. In Hot Off the Press, The Watford Sun’s photographer, Geoffrey Williams, is my favorite character. He’s a charming, effusive gay man with a great sense of humor and he’s the heroine’s best friend. He’s made up of many of the personality traits I love and cherish in my own friends.

2. Tell me about your travels.
Every year my husband and I travel south over the Christmas holidays and to Europe in the fall. So far, my favorite destinations have been Florence, Italy and Nosara, Costa Rica. We have an infant daughter and we just had her passport photo taken. I can’t wait to take her traveling and discover the world through her eyes!

4. What else can you do besides write?
I am a freelance TV writer-producer and I’ve produced lifestyle and entertainment programming for networks such as CMT Canada, Teletoon and Cosmopolitan TV, to name a few. I also enjoy photography, yoga and combing through markets and thrift shops for that special find. I speak four languages which really comes in handy for haggling and negotiating – whether I’m buying a purse in a South American market or producing a shoot overseas.

9. Food you could eat everyday.
I’m not sure they count as food, but I love Popsicles and Real Fruit Gummies and I could eat them everyday…and sometimes do.

10. Are you into sports or other physical activities?
11. What kind of music speaks to you?
12. Do you outline your stories or do they just take you along for the ride?
13. Celebrity crush.
14. Who are the biggest influences on your work?
15. Do you still watch cartoons?

Méline Nadeau is an award winning writer and television producer.

Her written work has been published by a variety of national news and entertainment sources including The Ottawa Sun, The Kingston Whig Standard, and Urban Male Magazine. She has produced multiple television series for networks such as TVOntario, CMT Canada, Teletoon and Cosmopolitan TV, to name just a few.

Méline hails from Ottawa, Canada where she studied Print Journalism and she holds a Masters degree in Writing Popular Fiction from Seton Hill University in Greensburg, PA.

With over 15 years of writing and broadcasting experience, she has won awards both for her work in television and for her fiction – a Bronze Broadcast Design Award for a spot she produced for Scream, Corus Entertainment's horror network, a Gemini nomination for the Lonestar Live And UpFront special she produced for CMT and three Golden Opportunity Awards (2005, 2007 and 2009).

Méline’s work has taken her all over Canada, the US and the Caribbean where she has produced interviews and TV shows featuring celebrities, designers and musicians as varied as Kris Kristofferson, Marc Jacobs, 50 Cent and Jon Bon Jovi. She divides her time between Toronto and Los Angeles where she enjoys photography, yoga and spending time with her husband, screenwriter, Russ Cochrane, and infant daughter, Chloë Echo.

Find Meline at these links online: 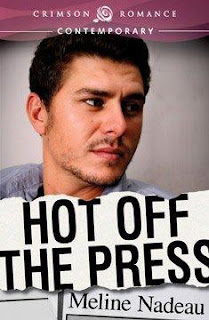 DESCRIPTION FOR Hot Off the Press:
Following the death of her father, Leigh returns to the sleepy seaside town of her youth, where, she’s shocked and surprised to learn she’s inherited the family paper. For a seasoned journalist with the country’s largest daily, running a small town newspaper should be a piece of cake.

She hadn’t counted on having to share the reins with David, her father’s right-hand man. Leigh sees him as an arrogant tyrant who believes that his way is the only way. David can only see her as the private school brat who’s had everything handed to her on a silver platter. To top it all off, the paper’s in serious financial trouble and the townspeople are keeping some ugly secrets under wraps.

Despite their differences, Leigh and David are going to have to work closely to save the failing paper—very closely. Their major scoop and saving grace comes by way of a prison break from the local penitentiary. And when an escaped convict highjacks the presses and holds Leigh hostage, only one person can come to her rescue.