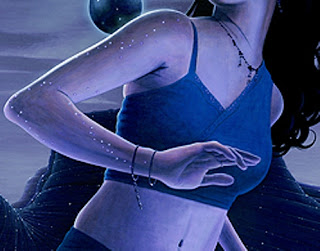 Fragger, the second novel in the Ambasadora series, will be coming soon. So here's a snippet from the beginning of the book where we drop in on Sean discussing Sara's recent, life-threatening seizures with Yul, a fragger doctor.

The picture on the left is cropped from the cover of Ambasadora to show a close up of Sara's bio-lights, which will become the large arc in the the remaining books.

Those little lights will change the world....

"I believe the problem stems from her bio-lights," Yul said.

Sean pictured the small lavender dots of the intra-tattoo swirling under the skin of Sara's arm. It had been too long since just his touch could send them racing and pulsing. Their mesmerizing effects had been as good as a drug during the one night they were intimate. He thought about that night ever since, wondering when they would have the opportunity to be that close again. Fear of losing her twisted his insides like no amount of torture ever could...or had. He pushed the terrors of Palomin out of his mind. They'd just revisit him tonight again anyway.

"How can you know for sure that it's her bio-lights?" Sean asked.

"Because of the pattern, the same pattern each time."

Greenshift, the prequel to Ambasadora, is also available at Amazon.