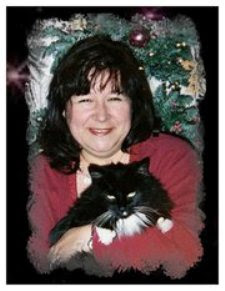 3. Coffee, tea, or milk?
Coffee! I LOVE coffee. Starting a day without it is unthinkable. I also like it for an evening treat if I don't have to be at work at the crack before dawn.

4. What else can you do besides write?
I crochet. Went through a hat phase, but now I think l want to do shrugs (the little sweaters). Also, in real life I teach a developmental preschool--I fear no three year old with blocks!

5. Who are you reading right now?
I'm rereading the Amanda Quick Arcane series but recently picked up several popular Ellora's Cave SFR authors. I haven't read any EC titles for a long time and wanted to see what they are doing now--research!

11. What kind of music speaks to you?
Bon Jovi is my favorite band, so I have most of their CDs. I also have a fine selection of eighties music--Cindy Lauper, The Boss, Chris Isaacs etc. I like New Age instrumental and Native American Pipes and drums. Also love the sound tracks to Firefly and Serenity, especially for my steampunk series. I write in my living room and generally use the music to drown out my family, hahaha.

12. Do you outline your stories or do they just take you along for the ride?
I write the initial inspirational scene with the hero, heroine, setting and initial conflict. After that I write a narrative synopsis--tell myself their story. Usually my first written scene, the inspiration, ends up on the cutting block because it is full of backstory that has to be woven into the rest of the book.

13. Celebrity crush.
I like blonds. Both my sister and I have the same taste in men--we are short brunettes who married tall blonds. So, Jon Bon Jovi, Brad Pitt, James Marsters as 'Spike'.

Take a shy, chubby, Catholic school girl bookworm from Montana. Hand her a stack of her much older brother’s sci fi and fantasy novels, James Bond books and horror comics. Later, introduce Barbara Cartland and the world of romance fiction.

Get her a teaching job or two in authentic, one room Montana schools, ala Laura Ingels Wilder.

Marry her off to a great guy, move her to a big city in Tornado Alley, then pop three daughters out of her in twenty two months(one set of identical twins).

Then, make her a jinx–every great genre TV show she loves gets the ax– Beauty and the Beast, Dark Angel–and Buffy and Spike NEVER have a happy ending! She gets upset about no romance in the world, and fires up to write her own stories with happy endings.

Throw this all together into a small house in Wyoming, along with a small bouncy dog named Baxter and too many cats, shake constantly and pour it out onto a computer keyboard.

There! You have me, Melisse Aires. 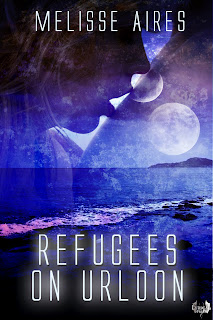 DESCRIPTION FOR Refugees On Urloon:
Two weary refugees, two moons and a life-changing fertility festival. Watch out for a whole lot of sensuality.

Under normal circumstances, Svana, non-military maintenance crew, and Captain Liam Ringel, a highly respected military instructor, would never have crossed paths. A sudden anomaly, however, thrusts them into deep space where they are rescued by the inhabitants of an exotic and isolated waterworld, Urloon.

With no rescue forthcoming, the refugees can choose between adapting to the sea or farming the land. Svana is saddened when her budding friendship with Liam changes due to their different choices. However, when they are invited to an alien fertility festival, the Moonfest, they are given the opportunity to create a memory that will impact and intertwine both their futures.

Find Melisse online at these links: