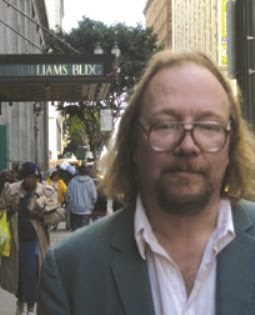 1. Which of your characters is your favorite?
My own favorite character is Fish Deebak one of the three leads in my novel, Fish, Soap and Bonds. He lives on Skid Row, but he is always looking for an adventure. He is my homeless Don Quixote.

2. Tell me about your travels.
I enjoy travel very much. I have a lot of "favorite " cities, but two places that have really made a mark on me are Barcelona and Seoul.

Barcelona really moves me. The history of the city and within the city -- both medieval and more recent -- is remarkable. The mix of cultures. The birth of modernity in the Late Middle Ages, the Spanish Revolution, the artists -- Picasso, Miro, Tapies, the wanderings of Jean Genet in El Raval. Struggles for both political freedom and freedom of expression.

I hadn't planned a trip to Seoul, but one of our daughters moved there. So we went, and it was absolutely fascinating. We had thanksgiving dinner 2010 at an Italian restaurant atop Namsan Mountain in central Seoul. The North Koreans bombed the South's Yeonpyeong Island while we were there. It's only about 50 miles away. The South Koreans reacted with incredible stoicism and calm. They are a people who have had to fight to gain and re-gain their independence over and over. And, it shows. At the same time there is this incredible beauty and grace. We'd planned a trip to the DMZ. I still wanted to go, but the officials canceled. But, just a great city: The museums, the nightlife, the whole shebang -- underrated as a place to go, truly.

3. Coffee, tea, or milk?
Neither coffee, nor tea, nor milk. Diet Coke.

5. Who are you reading right now?
I'm now reading "Say It Hot," a book of criticism by Eric Miles Williamson, "there's Nothing I Can Do When I Think of You Late at Night," a collection of linked stories by Cao Naiqian, and "The Marbled Swarm" by Dennis Cooper.

12. Do you outline your stories or do they just take you along for the ride?
I do not outline. I'd even like to try, but it just doesn't work that way for me. The story -- as you say -- takes me along for the ride. But, really, I love it that way. It makes the writing process itself exciting.

Flannery O'Connor once said that first she wrote one sentence, then another, and then another. "Good Country People" is one of her most famous stories. The dénouement occurs when a visiting Bible salesman steals the prosthetic leg of the protagonist, who had dreamed of seducing him. At a question and answer session at the University of Georgia, a student asked her when she knew the salesman would steal the leg. "When he stole it," she said. Her book, "mystery and Manners," is one of only two or three books on writing that are worth the cover price.

The best writing comes from the gut.

Larry Fondation is the author of the novels Angry Nights and Fish, Soap and Bonds, and of Common Criminals, a collection of short stories. His fiction focuses on the Los Angeles underbelly. His two most recent books feature collaborations with artist Kate Ruth.

Fondation has lived in LA since the 1980s and worked for fifteen years as an organizer in South Central Los Angeles, Compton, and East LA. His fiction and non-fiction has appeared in a range of diverse publications including Flaunt (where he is Special Correspondent), Fiction International, Quarterly West, the Los Angeles Times and the Harvard Business Review. He is a recipient of a 2008-09 Christopher Isherwood Fellowship in Fiction Writing

DESCRIPTION FOR Fish, Soap and Bonds
Fish, Soap and Bonds follows the movements of three homeless people on the unforgiving streets of Los Angeles. Through their eyes we experience both the depths and heights of humanity: hate and discrimination, sacrifice and redemption. This is the third in Fondation's series of "LA Stories."

DESCRIPTION FOR Unintended Consequences
Unintended Consequences is the 4th installment in Fondation’s “L.A. Stories” series. This new collection reveals with precision the way life can tangle good intentions and trip up even the most sure-footed pedestrians. These are compact city fables delivering an anti-moral, a humbling reminder to judge not. The book includes over 40 illustration by artist Kate Ruth.

- https://twitter.com/RDSPress
Posted by Heidi Ruby Miller at 11:04 AM