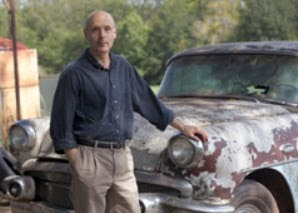 2. Tell me about your travels.
I am a mental traveler in every sense of the phrase, but in the last two years I've had the opportunity to teach in Provence and visit Paris, so I have been bitten by the wandering bug. In Poe, a wanderer is a lunatic.

4. What else can you do besides write?
Blow wine through my nose trying not to laugh when my daughter on her 23rd birthday says she feels old.

5. Who are you reading right now?
Rereading Duras' The Lover for a Corra Films project, Robb Graham's The Discovery of France for a novel, Life on the Mississippi for pleasure, and Jerusalem: The Biography for horror. The Prologue alone is worth the price.

6. Pop culture or academia?
Both. But not, if by academia you mean the catastrophe of the last thirty years visited upon English Departments in the name of critical theory, which is neither critical, nor theory.

8. Where do you find your inspirations to write?
People, phrases, maps, books, coincidence. Laurie Anderson said, "Everything is here already." You have to find it, or be patient enough for the time when you can see whatever you need. Graham Greene said something to the effect that when you are writing a novel, what you need will find you because your mind, consciously or unconsciously, has prepared for its arrival.

9. Food you could eat everyday.
10. Are you into sports or other physical activities? 11. What kind of music speaks to you?

12. Do you outline your stories or do they just take you along for the ride?
Better not to know. I don't outline, but I'd hazard those who do leave plenty of room for the unexpected. In her twenties, Flannery O'Connor thought she was retarded because she started with a blank page and line to line, paragraph to paragraph, waited for a character to make a gesture that would show the way. She thought writers sat down with stories in their minds already written and then typed them out. Perhaps unconsciously that's what happens, but nobody knows how or why a story happens or works. Neuroscientists are studying "creativity," but in their lectures I sense they will get nonplussed sooner than later, because that mystery may be beyond their means of understanding it, or they will believe and say things they can't prove. That parts of a brain in an MRI light up might tell us about how the brain was built up over eons and epochs, and what damaged parts effect what cognitive and motor functions, but it's also (an analogy not original with me) like someone pressing a palm to a laptop and by feeling a warm spot saying with certainty what program is running. The disturbing trend in cognitive science: it's in a hurry to get into our legal system. It says it isn't ready yet. Not nearly. But claims it one day will be. Pop cognitive science is becoming scientism. Does anyone remember the promises of Artificial Intelligence? Regarding outlines or not, I recommend Barthelme's essay/story, "Not Knowing."

George Williams was born in Chattanooga, Tennessee and grew up in Birmingham, Alabama and Richmond, Virginia. He is the author of Degenerate, a novel. His stories and essays have appeared in The Pushcart Prize, Boulevard, and The Hopkins Review, among others. He is the recipient of a Michener Fellowship and a grant from the Christopher Isherwood Foundation. He teaches at Savannah College of Art and Design and works as a consultant and writer for Corra Films. 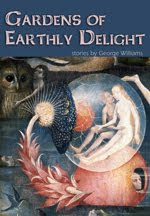 DESCRIPTION FOR Gardens of Earthly Delight
You really can’t read Proust in Texarkana.

A modern alchemist falls prey to a magic darker than his own. The Antichrist's mother goes on the run in Spain. In his garage a physicist builds a tribute to his beloved. An old man and his mule tour the roadside wastelands of the Gulf of Mexico. Sixteen stories span the world from Texas to Paris by way of Damascus. Filtered through the lens of the strange and uncanny, everyday events take on a sinister aspect. These gardens are delightful, but a serpent lurks behind each blushing fruit, beckoning the reader into the shadows.

Ever seen a man crucified?

Gardens of Earthly Delight reaches beneath the surface of simple stories and casts them in an ominous, tragic-comic light. Heists, revenge, a trip to the casino, author George Williams takes all of them and makes them new, exotic and not a little bit disturbing. 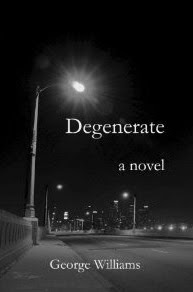 DESCRIPTION FOR Degenerate
A two year old mystery. A missing daughter. A cross country road trip. Chris, an aerospace engineer, is on a mission. He abandons his life in Savannah and drives west. Along the way, first in New Orleans and then in Austin, he picks up passengers. Julia, a Czech woman fleeing a boyfriend and business partner, and JC, the daughter of a Baptist minister, who on a manic whim joins them and leaves her life in Austin behind. Displaced, in flight from their respective pasts, with Chris planning a revenge he may not have the nerve or the opportunity to exact, the three form shifting alliances and friendships as they drive across Texas, Colorado, Utah, Nevada and California. In Los Angeles, they rent a house in Venice Beach and explore the city—graveyards, art districts, the L.A. County Coroner’s Office, Catalina Island, bars, boardwalks, promenades, tar pits, dances clubs, flight museums. On Christmas Eve in a Holmby Hills mansion, the story culminates in a confrontation with the man Chris believes to be partly responsible for the disappearance of his daughter.

Degenerate is a road trip novel out of Kerouac and Nabokov, a comedy of revenge and satire about Los Angeles that brings to mind Nathaniel West and a story of love and loss at turns lyrical, hilarious and heartbreaking.