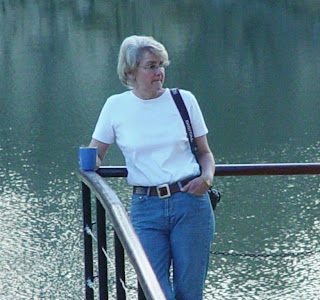 1. Which of your characters is your favorite?
I have three strong characters in my new novel, Starheart. I like them all, as a matter of fact. Admiral Hudson is a strong, very attractive man who can have a tender side. Santh Dekstra, gay first officer of the Saintly Maid, is a really nice guy, a girl's best friend but with problems of his own. But if I have to pick, it will be Jess. She's a widow with a slightly shady past, trying to make a place for herself and those she loves in the galaxy. She's smart, tough, a bit inclined to go off without thinking too hard, intensely loyal and basically honest.

2. Tell me about your travels.
I've been a few places. Last trip was a jaunt around the world (literally) on trains and boats and planes. We flew to Europe, spent some time in Holland then went on a Baltic cruise taking in Copenhagen, Warnemunde, Tallinn, St Petersburg, Helsinki and Stockholm. Then we flew over to America, where we spent a few days in New York, then caught a train to Washington for a few more days there. From there we flew to San Francisco, and then on home via Brisbane. We were away about a month.

4. What else can you do besides write?
I'm a strictly amateur photographer, although a few of my wildlife pictures have been accepted for sale on Dreamstime. I snap the world around me – birds, whales, bees, flowers and nice landscapes of the beach. And my husband tells me I'm not a bad cook.

5. Who are you reading right now?
I'm re-reading a few Jack McDevitt novels. They're hard science fiction mixed with mystery. I love his stuff because he manages to combine science with history in an utterly plausible way.

7. What is the toughest scene you ever wrote?
Actually, there are quite a few scenes in my historical novel, To Die a Dry Death, which might qualify – the book is based on true events, where the survivors of a shipwreck off the coast of Australia in 1629 came under the sway of a psychopath. He and his henchmen (there are always henchmen) murdered as many as one hundred people. In contrast, only around seventy died when the ship sank. Men, women and children were murdered, some were forced to murder others to save their own hides. But the hardest one to write was when a man and his eldest daughter were invited to dine with the psychopath. While they were at dinner, the man's wife and his six other children and their maid were killed. The man and the eldest daughter must have heard what was happening. It took me a while to get that down on paper.

11. What kind of music speaks to you?
In a word, Baroque. I love the complexity of the music. I lie down and let it wash over me, particularly Bach's organ music. Pachelbel's 'Canon', Vivaldi and all those composers you'll find on a Baroque sampler. I also love Beethoven. When I'm walking I listen to pop, bopping along with songs from a variety of popular artists. 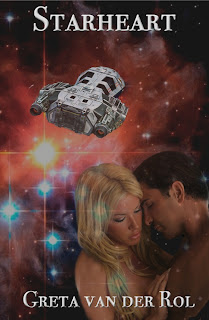 Greta van der Rol loves writing science fiction with a large dollop of good old, healthy romance. She lives not far from the coast in Queensland, Australia and enjoys photography and cooking when she isn't bent over the computer. She has a degree in history and a background in building information systems, both of which go a long way toward helping her in her writing endeavours.

You can find out more about Greta's latest release, Starheart on Amazon - http://www.amazon.com/Starheart-ebook/dp/B007B1W37O

GIVEAWAY!!
To celebrate the release of Starheart she'll be giving a $25 Amazon gift voucher to one person who leaves a comment on any of the blogs she visits until 10th March. So leave a comment here and you'll be in the draw.

Find Greta online at these links: