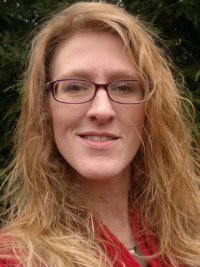 2. Tell me about your travels.
I am a domestic wanderer, a day-tripper, an in-state vagabond. I love travelling with my husband and two kids throughout eastern PA; Philly is our second hometown and we spend a lot of time there. We're drawn to science and technology centers as well as natural history museums. We also like historic sites like Colonial Williamsburg and Baltimore's Inner Harbor. The best part about travelling, however, is the food—my kids are definitely foodies at heart and they love eating their way across the state as much as I do. I just wish I had their metabolism.

3. Coffee, tea, or milk?
I am a hot tea snob and proud of it. Loose teas only, preferably a first-flush Darjeeling. Tea bags, be damned. I am a lot more forgiving with iced tea and even drink it out of cans. (I know, right? It's so street.)

7. What is the toughest scene you ever wrote?
A sex scene for a short story called "Kamikaze Blonde". I usually write sweet romance and all I kept thinking is "I hope my mom doesn't read this." Turns out, she later told me, she's read worse—and then proceeded to gross me out by telling me all about it. Hello, Mom, sounds like a sex talk and it's just as uncomfortable as the one you gave me twenty-five years ago.

11. What kind of music speaks to you?
I can't pin it down to one style, but all my favorites have one thing in common: emotion. I love intellectual Rush, moody Lacuna Coil, battle-raging Blind Guardian, wistful Nanci Griffith, depressing Type O Negative, and maniacal My Chemical Romance. If the music can strike an emotional chord within me, draw me in, submerge me in the experience, then I'll listen. Otherwise, it's just noise.

13. Celebrity crush?
Rather than risk being alienated by my husband by answering that, I'll pose a counter question: celebrity sleepover!

I have a circle of imaginary BFFs…Cameron Diaz, Alison Sweeney, Milla Jojovich, Drew Barrymore, Kate Beckinsale, and Sarah Michelle Gellar. Recently I started hanging around with Mayim Bialik because she bumps up the hippie mom factor. We'd stay up all night doing Jello shots, playing the Wii, and crank calling my mother. My husband is still jealous but in a totally different way, now.

15. Do you still watch cartoons?
Heck, yeah. I have no choice, with two kids in the house (three if you count my husband). Anime in one room, Looney Tunes in another, and Family Guy when the kids finally go to bed. Animaniacs was the best—I still watch them on DVD. I'm proud to say I've watched The Simpsons from their early days on the Tracy Ullman show.

I collect comic books, too, in case you wondered. =)

Ash Krafton is a writer of all things spec fic. She believes spectacular endings make the best beginnings...

Why not? One billion black holes can't be wrong.

Her first novel BLEEDING HEARTS: Book One of the Demimonde was published in March 2012. The manuscript earned finalist distinction in several Romance Writers of America 2011 competitions and has been awarded several other awards.

In addition to novel-length fiction, Ash enjoys writing poetry and short prose, some of which earned big ups by CNW/FFWA in 2008 and 2011 as well as the Abilene Writers Guild in 2010. Ms. Krafton made her publishing debut in Spring 2009 when her poetry appeared in Poe Little Thing; her work has since appeared in several other journals including Niteblade, Ghostlight Magazine, The Skyline Review, and Silver Blade. One of her poems was selected as a Pushcart prize nominee. She's a Published Member of Pennwriters and is co-editor of her area's Wordpress blog. She also contributes to Query Tracker’s blog.

Ash resides with her family in a rural town in the heart of the Pennsylvania anthracite coal region.

She'll never leave, either, because coal is just another example of a spectacular ending waiting for a brilliant beginning. (It’s kinda fitting.) And because, like a black hole, once you’re in...

you can never get out...

Find Ash online at these links: 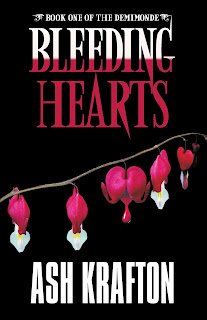 DESCRIPTION FOR Bleeding Hearts: Book One of the Demimonde
Saving the world one damned person at a time—a shy advice columnist-turned-oracle must find a way to save her dangerous demivampire lover from the fate that threatens each of his race: evolution and the destruction of his soul.

When advice columnist Sophie meets dark and alluring Marek, she learns life-changing secrets about them both—he’s a demivampire struggling to avoid evolution and she’s an empathic oracle destined to save him. Sophie possesses the rare ability to reduce the spiritual damage that causes a demivamp to Fall, making her the only thing that stands between a DV and evolution. However, as Marek's dangerous past propels him toward his desperate fate, his enemies make darker plans for him: once vampire, powerful Marek would be second only to the Master himself. The vamps want to cause Marek's Fall and they intend to use Sophie to do it....