I hosted the February Broadly Speaking for Broad Universe this year and had the pleasure to discuss one of my favorite topics, Romance in Speculative Fiction, with three wonderful writers: Brenda Cooper, Alexa Grave, and Pauline Baird Jones. You'll get to meet all of them this week, starting today with Brenda's path to publication.

Click here to listen to the podcast or go to:
http://broadlyspeaking.posterous.com/february-2012-romance 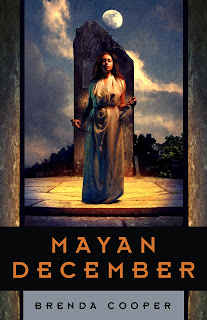 Wow. I had an easy path, comparatively. I have been good friends with writer Steven Barnes for decades, and he introduced me to his collaborator, Larry Niven. Larry and Steve and I shared an interest in yoga, and through enough twists and turns for a novel (which I won't subject you to), Larry and I began collaborating as well. We sold a number of short stories, and I began to sell short stories of my own. One day while walking around Lake Sacajawea in Longview, Washington, we came up with an idea for a novel. The idea eventually became Building Harlequin's Moon, which took a few years to finish, and which I'm still proud of today. Larry and I haven't done any other books together since then, but I will always be grateful for the introductions he provided and for the advice. I learned a lot from writing with him.

So I guess I took the "be lucky enough to find a fabulous mentor" path into publishing. I was doing my work – I was writing and studying and learning. If I hadn't been, either the opportunity wouldn't have come my way, or I wouldn't have known enough to take it and make it work. Come to think of it, a lot of the stubbornness that keeps me working can be directly traced back to Steve, and some classes I assisted at while he taught. So maybe I even had "dual mentor luck." But at any rate, I know I am blessed in my friends. While I don't think anyone should expect this path to be visible or available, and while I don't think it can be found (a stranger generally can't walk up to a published author and ask to collaborate – that's a better way to get awkward silences than help), it does happen. Often not this directly. But in the speculative fiction field, the tradition is to help one another, to pass it forward, and to smooth the path for new writers. At this stage in my career, I've had help from more than just Larry and Steve, and been help other people. This is, after all, a community.

My most recent book is rather close to my heart. It's called Mayan December, and its the first fantasy, the first contemporary (partly) novel I've ever written, and the first historical (partly) novel I've ever written. Mayan December is set at the end of the Mayan Calendar on the Yucatan Peninsula, which is one of the most beautiful places in the world. And no, the world doesn't end. Mayan December came out last August from Prime Books, and can be found in physical and electronic forms in all of the usual places. The first few chapters are available for a sample at http://www.mayan-december.com. My next books out will be science fiction duology that Lou Anders is publishing over at Pyr. Let's call it blended story that's a bit of hard SF set on a generation ship and a bit of the Eva Peron story. And also a nice little space revolution. Oh, and…

Brenda Cooper lives in the rain-sodden and beautiful Pacific Northwest where she works as a technology executive and writes science fiction and fantasy in the wee hours of the morning. Her most recent published novel, Mayan December, came out from Prime Books last August, and Pyr will be publishing a duology that can loosely be described as "Evita in Space" in 2011 and 2012.