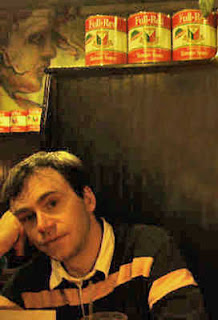 1. Which of your characters is your favorite?
The boy in “cool spaceship, man” (from an upcoming collection: as I floated in the jar, Eraserhead Press, spring 2012)

His parents shop at thrift stores, so he wears only drab old clothes and thus has an ‘old man’ vibe about him, even though he’s just a kid.

Re-reading: Return to the city of white donkeys, by James Tate. Imaginative prose-poem stories, kind of similar to Richard Brautigan’s Revenge of the lawn in tone.

I’ve been watching a lot of DVDs from friends and the library. Mad Men and Breaking Bad, which I think are really interesting in that they have hours and hour and hours to explore these people. Thus these shows are more like novels than movies or other tv shows, so they become a new paradigm. The Wire is on DVD at my local library. Hopefully one day I’ll be able to check out Deadwood, the Sopranos, etc.

Those are definitely different forms of story telling, evolving and unfolding slowly over time, so a different way of looking at things.

6. Pop culture or academia?
I like mid century modern stuff, so pop culture from the 50s and 60s, and some 70s.

The recent past is too recent. I wonder if in 20 years I’ll be nostalgic for the 90s and 00s? Probably not as the last 20 years nothing new has seemed to immerge.

I like the academia of art, music, UFOs, literature, sports, how things formed. So I study that.

8. Where do you find your inspirations to write?
Often just walking around. A scene or story will pop into my head. One time I was walking my dog and saw a two foot piece of old wet rope in the grass. It looked all washed out, like a spine from an animal. It got me to thinking it was a creature slowly being broadcast here via radio waves from another planet. So I went home and wrote up that story.

Sometimes I’ll overhear something on the bus or at work and it will get me to thinking. It will just be a snipet of a conversation. Usually an ending will pop into my head and I’ll have to work backwards.

Usually the stories come to me in quiet times – at the supermarket, on the bus, walking my dog. As if they’re rattling around in my head or in the air, and they collect and coalesce in the quiet moments. So actually turning off my brain really helps, and listening to the corners of my mind.

10. Are you into sports or other physical activities?
I bike and walk my dog (jog for about a block or 2). It’s good to get out, get fresh air, grove my body, meet new people, see new things. I feel cooped up a lot of the time.

I don’t have time for much else, though I should canoe as there are lakes by my house.

I follow NBA basketball and a little Major League baseball. I watch some NFL football.

A little bit of everything, depending on my mood. Luckily there are radio programs that play some of this, so it's available to hear stuff I haven’t heard before to keep things fresh.

12. Do you outline your stories or do they just take you along for the ride?
Usually I get the ending first. Something will just pop into my head, a last line or scene. Then I’ll work backwards from that. Sometimes the entire thing will hit me – beginning, middle, ending. Mostly I write short stories, so there’s not too much to remember.

Sometimes I’ll get a great premise, and it won’t go anywhere. I’ll get an interesting beginning or middle, but then no ending will come to me. I save them and sometimes a few years later an ending will hit me.

Sometimes I’ll get a really good idea that I won’t be able to get to snap.

I only outline really long work, just to be sure I’m not redundant with my info, and to streamline the story as much as possible. As a writer it’s easy to get overly wordy.

13. Celebrity crush.
Only 2 or 3, which is interesting in itself (I mean, why only 2? Shouldn’t I like a lot of things? Why limit yourself?).

Almost too embarrassing to admit to. They are usually more obscure actresses. Why do some people make you go: “whoa, who is that?” and others do not? Doesn’t matter though as I’d never ever meet them anyway.

One time I had a dream that Jennifer Aniston was my girlfriend. I mean we were in a committed, monogamous relationship. We hung out and went shopping and to parties and everything. It was a super long dream. And she was really into me. The funny thing is – in real life I never saw her that way, so why would I suddenly dream she was my girlfriend? (I've never seen her movies and don't watch her show) Why not someone I’m super attracted to? Like Monica Keena, who I think is really talented and interesting, not that I’d ever even get to meet anyone like that, much less in a social setting (I’m sure they have gobs of guys crawling all over themselves just to get to meet them).

Kirsten Dunst is interesting as she looks a little cold, distant, and indifferent in photos. Why do you ask? Think I’ve got a shot with her? Maybe you could mention me to her, pass along my number.

Oh, and Shevonne Sullivan from TMZ is breathtaking. I think it’s her dimples. And she seems really fun and down to earth, though I’m sure she’s already spoken for.

14. Who are the biggest influences on your work?
I’ve got a “things I like” section on my wordpress website if you want details, but mostly short story writers as they get to the point quickly. Anyone interesting, imaginative, and concise. Anyone that makes you think. Mostly I like strange or absurd adventures that are well crafted and have a meaning to them -

I also like evocative music. For some reason I gain a lot of inspiration from music, and art, though I don't know why or what they have to do with story craft.

15. Do you still watch cartoons?
No, because I don’t have cable. If I had cable I’d probably not get anything else done, though I’m missing out on some interesting shows. Luckily some are coming to DVD at my library.

I like the old Warner Brother’s cartoons. And Droopy. 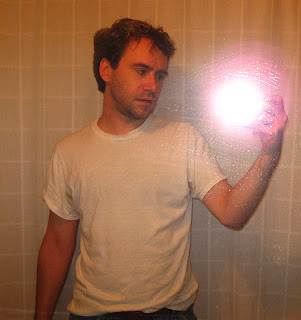 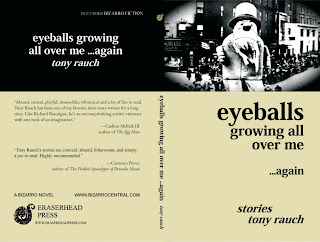 Blurb from "Eyeballs growing all over me . . . again"
A 140 page short story collection of imaginative, whimsical, dreamy, absurd, surreal fantasy, sci fi, and fairy tale adventures. These fables will make great story starters for young adults and reluctant readers. Some of the pieces are absurdist or surreal adventures that hearken back to imaginative absurdism, sci-fi, and fantasy of the 1950s.

With themes of longing, discovery, secrets, escape, eeriness, surprises, and strange happenings in everyday life, readers will delight in these brief but wondrous adventures -

- a man comes home to discover a Bigfoot-like creature watching his TV.

- a giant robot pays a visit to a couple.

- the new kid at school has some unusual toys to share.

- an inventor creates an attractive robot in order to meet women.

- a girl becomes so ill she has her head replaced with a goat head.

- someone wakes to discover little eyes growing all over his body.

- small, hairy creatures come looking to retrieve an object they had misplaced.

- a boy finds an unusual pair of sunglasses in a field.

These short stories will give a reluctant reader a sense of accomplishment after reading.

These fables will make great story starters for young adults and reluctant readers.

- people travel into the past to get away from a regression plague that slowly turns people back into primates.

- a stranger extracts a baby from a man waiting for the bus.

- a man gets a verbally abusive amorphous blob as a roommate.

- a lonely girl finds a small spaceship in the woods.

- a farmer invents gadgets to fight off infiltrators leaking in from another dimension.

- a jar falls from a passing wagon, spilling a strange liquid that turns a small mud puddle into something else.