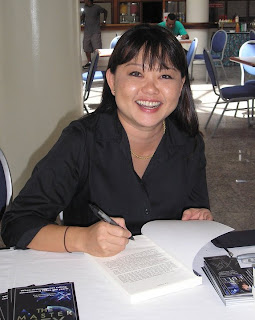 1. Which of your characters is your favorite?
It would have to be Loeb, a small secondary character from the Lancaster trilogy. He's more or less on the edges and sort of looking in with mild wonderment at all the comings and goings. While he didn't get highlighted in the first book, in the second and third, he gets some air time. I like him because he's unassuming, observant, and he can kick some a** when he's ready.

4. What else can you do besides write?
Besides writing, I'm a freelance graphic artist...something I've been doing for so long that I remember when I did everything by hand. Thankfully, desktop publishing programmes came about and I fell in love with computers. It was love at first sight.

5. Who are you reading right now?
Right now, I'm nearly done reading The Girls from Alcyone by Cary Caffrey. It's a refreshingly exciting SF book! Reminds me of a movie (it would make a good movie). While I'd loved to have sat from start to finish and read it all, I had to take many breaks due to work-related issues. But now I'm nearly done. After that, I'm moving onto Battle Dancer by K.M. Tolan. It's the last book in his Dancer space opera series, and I can't wait to start!

8. Where do you find your inspirations to write?
From everywhere and anything - from people watching to idle moments during the day. Sleeping (just before sleeping) also helps. I'm a constant and persistent daydreamer, to the point my mind wanders even while having a face to face conversation
with someone. I've learned to hide it well, though.

My current WIP (2nd draft) came to me in a tea shop looking for Christmas gifts last year. I looked around, saw posters and charts about different teas and their origins, and thought about how long tea had actually been around. Then I wondered how much longer the tea tradition would last. Instantly, my mind skipped several hundred generations into the future (let's call it an even 2 thousand years) and out popped this entirely new star system that cultivated teas like their ancestors did on Earth. Of course, when I actually wrote about it, tea was only mentioned briefly. I may add in some more tea-related things here and there.

12. Do you outline your stories or do they just take you along for the ride?
Outline, outline, outline! And lists and sub-lists. Unless I write down key notes in chronological order, I'm unable to write properly or concentrate. I once tried to let it just pantser out of me, and what came out was stupid and had no form. I hit delete and went back to my notes. However, when writing dialogue, I sort of let it free-fall out of my head (keeping in mind the general outcome of the scene), kind of like having an actual conversation with someone else. 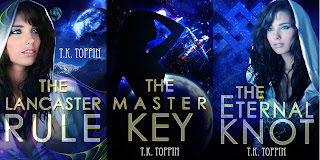 TK has been working as a graphic artist for more years than she can remember. Based in Barbados, where she was born, writing has always appealed to her – whether reading someone else’s literary masterpieces, or doing her own disjointed ramblings.

Early in 2008, TK finally received the right motivation to just jump right in and start writing seriously. You could say she received a very strategic kick in a very specific part of her anatomy! Figuratively speaking, of course.

In 2010, her debut SF/SFR novel The Lancaster Rule was published and released by Champagne Books (and their SF/F dedicated imprint, Burst Books). In 2011, the sequel, The Master Key was released. The Eternal Knot is the last in the Lancaster Trilogy and has been released this January.

TK usually prefers writing SF/R but may be tempted to dabble in a some Fantasy in the near future.

Find TK online at these links: 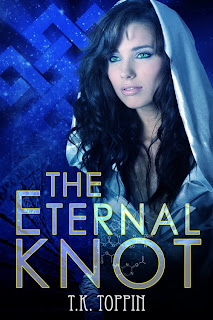 SYNOPSIS of The Eternal Knot

Unable to resist the lure of finding her niece, Josie picks up the crumbs of clues left behind. With her old friend and saviour, pod-hunter Quin Aguilar at her side, she seeks out Fern Betterncourt who is assumed to be sleeping for over a hundred years.

From an unlikely source, Fern’s location is discovered, and together with her husband, Josie seeks out her last link to her past. Will Fern want to be found? And will finding Fern be enough to bury the ghosts that haunt Josie? Can Josie bring herself to destroy her last remaining family in order to save herself?

The Eternal Knot, the final chapter in the Lancaster trilogy: Every question answered, every truth revealed. Will Josie finally rest in peace in the new future she lives in?