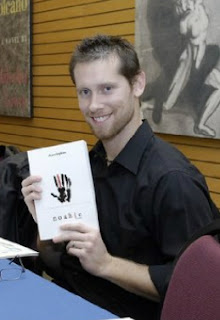 1. Which of your characters is your favorite?
Wow, that’s a tough one. I think I relate to most of my characters in some way or another so it’s hard to pick just one… I tend to like secondary characters more than the primary, maybe because we don’t get to see them in the same revealing light and so there’s more freedom to imagine what they are or are not. For some reason that I can’t explain at all, I really like the character Paul in Progeny. I have no idea why. Maybe because Paul is my cousin’s name and relate the two, maybe because he’s the complete opposite of me, maybe because I sympathize with him, maybe because I want to be him on some boyish level, I don’t know… He just intrigues me. In fact, he’ll most likely be the main character in the sequel.

2. Tell me about your travels.
My travels... Let's see. I've been to Bermuda twice, and it is by far my favorite place on the planet. In fact, I love it so much that I had to write about it, my novel Progeny being set there. If I could move there, I would in a heartbeat. Both times I went were on cruises, so I would love to stay there much longer some day. My wife and I rented bicycles and rode from one end of the island to the other and it was incredible. The people there are the nicest, friendliest people I’ve ever seen. And not just to the tourists, but to each other as well. When elderly people stepped on to the bus, younger men and women jumped to their feet to offer their seat. Everyone waves to each other with huge white smiles. It was a far cry from what I’m used to here in Philly where it’s almost polite to keep your eyes on your feet as you walk. I've also been to the Bahamas, Cancun, and Jamaica. I've been to Ireland twice, and that may be my second choice of where I’d like to live… It was beautiful, and I love the weather there. Other than those places, I’ve been to Mexico about four times to help build houses for the impoverished people there, and of course those were trips that were of the life-changing variety. But the one place that I really want to visit that I haven’t been able to yet, is Washington state. Maybe someday. :)

8. Where do you find your inspirations to write?
My inspiration to write mostly comes from reading great authors. When I’m reading a great writer, I develop an itch that can only be scratched by writing. That’s how I know a book is one of my favorites. If it makes me want to get to the chapter break so I can jump on my laptop and pound out a scene, then the book usually ends up on my shelf and is revisited for future times of needed inspiration. For example, Danielle Trussoni’s Angelology was so inspirational as far as her writing style goes, that I read the first half of it twice before moving on to the end. At the time, I was working on Progeny (there’s some similar themes there) and reading her made me want to write my own story. And Lee Child’s writing was inspirational during the time span I wrote Even The Elect. So I’d have to say that who and what I read proves to be the greatest inspiration.

10. Are you into sports or other physical activities?
I used to be very much into sports. I loved playing football, and until a few years ago, I was still playing some pretty intense tackle football with my friends. But as most of my friends get older, married, have kids, and tend to get out of shape or run out of time, those days have become a thing of the past. It’s now a chore to try and get just a few guys together to do something physical. I played tennis the other day, and that was probably the first sport I’ve played in two years. I’ve been trying to run, but that’s hard for me to stay consistent with, and I’m just now finally getting back into the gym. I used to spend hours a day in the gym, but after my daughter was born, that slipped away too. But now I’m back, baby! Hopefully. But yeah, I love sports. And, except for the last couple of years, I’ve always been a very athletic person.

12. Do you outline your stories or do they just take you along for the ride?
Since I’ve been writing, this has kind of evolved into different expressions of both. My first novel, Noahic, I just sat down and started writing. I loved writing it because I had no idea what was going to happen next. But afterwards, I wasn’t too happy with it, so I crafted Progeny to be what that novel should have been. With Progeny, though, I was working off the central plotline of Noahic, so it was easier to outline, especially since there were things that I wanted to hit harder and tie up better. I had tons of information to try and get into Progeny, so that needed to be plotted in such a way that I wouldn’t find myself writing chapters of only information. I needed to know what I wanted to say and how to spread it throughout the whole book, rather than force feeding it to the reader all at once.

My novel Even The Elect was also a story that took me along for the ride, but again, I wasn’t completely happy with the end product. So The Solomon Key, which should be released in a couple weeks, is the second edition of that. So, I guess I like to write not knowing where things are heading, but in the end, I think it tends to work against me. What I’m finding that helps me now is a very basic outline (that is constantly changing as I write), having some sense of how I want things to wrap up, the information I want to use, and a specific evolution of at least some of the characters. Now before I start writing a scene, I try to imagine the whole thing in my mind, and then I examine it from different angles to make sure I’m not missing anything or compromising the story down the road, and then I sketch out a pretty crappy comic of the scene. Then I start writing… So I think it’s a combination of both, but definitely now, working on my 5th novel, I’m much more in favor of outlining and planning than when I first started. It’s not as fun, but it saves a lot of rewriting in the end.

14. Who are the biggest influences on your work?
Well this goes back to the other question, but I guess Lee Child, Dean Koontz, Steve Alten, Michael Chrichton, and David Morrell have been the most consistent influences on my writing over the years.

Shawn Hopkins is an independent author who lives in Pennsylvania with his wife and daughters. Fascinated by humanity's mysterious past (and future), his four novels find their inspiration via some of history's stranger instances of the unknown. Paranormal and conspiratorial, Shawn's writing has been called "an action-packed thrill ride." He is currently working on a sequel to Progeny and a prequel to The Solomon Key.

Find Shawn online at these links: