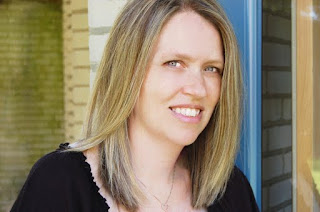 1. Which of your characters is your favorite?
That is such a hard question because I really love all of my characters. Of course I love Nate, but I think Nate’s mom is my favorite. She tries so hard to cook and sew be the perfect mother and housewife, stumbling every step of the way. I’d be lying if I said there wasn’t a little bit of me in her.

2. Tell me about your travels.
I don’t travel very much anymore, but I was very fortunate to be able to travel a lot when I was younger. In high school, my parents took me to Israel on vacation. That was amazing. In college, I participated in a study abroad program. I lived in London for three months. I travelled all over England, visited Scotland, Ireland, Amsterdam, and Italy. Later I spent a week in Paris. I’ve also been to Jamaica, and many beautiful places in Canada, as well as here in the United States. There is a lot to see in our own backyards – sometimes it is just fun to play tourist in your own city.

3. Coffee, tea, or milk?
Coffee definitely! Back in August when Hurricane Irene was approaching, most people were making sure they had enough water on hand. I was making sure I had enough coffee. I brewed and filled several thermal carafes full. Priorities people!

4. What else can you do besides write?
5. Who are you reading right now?
6. Pop culture or academia?
7. What is the toughest scene you ever wrote?
8. Where do you find your inspirations to write?
9. Food you could eat everyday?
10. Are you into sports or other physical activities?

11. What kind of music speaks to you?
I’ve really mellowed out ... I used to be an alternative rock DJ back in college. I listened to what was called “industrial” – Ministry, Nine Inch Nails, - - sort of punk meets grunge I guess. What ever you want to call it – it was loud. No more. These days, I seem to gravitate toward calmer music – At the moment, Adele is at the top of my list.

12. Do you outline your stories or do they just take you along for the ride?
They definitely take me for a ride. I have a very broad idea of what the story will be about, but for the most part, I let the characters take control. Every now and again I have to gently nudge them in the right direction. But for the most part, they behave. I love when a moment comes along and everything clicks. I think you miss that if you are working off an outline.

13. Celebrity crush?
It’s no secret I have a thing for John Cusack. Ever since “Say Anything...” in the 80s and it’s still going strong. I still expect to see him outside my window one day holding up a boom box that’s playing “In Your Eyes.” Yes - my husband is aware of my obsession. 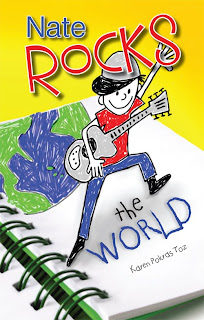 Karen Toz is giving away an e-copy of NATE ROCKS THE WORLD to one lucky reader!

Just comment on this post and include your email. And if you Tweet the follwing, you'll get an extra entry:
@karentoz @heidirubymiller Meet author Karen Toz on Heidi's Pick Six and enter to win her book! http://heidirubymiller.blogspot.com/2011/12/heidis-pick-six-karen-toz.html - The link will automatically be shortened in the Tweet.

Karen Pokras Toz is a writer, wife and mom. Karen grew up in Orange, Connecticut and graduated from Ithaca College with a degree in Finance. She also attended the University of Richmond, where she studied law and business, receiving both a JD and an MBA. Karen has spent the last several years working as a tax accountant, writing in numbers. She recently discovered a passion for writing with words. In June 2011, Karen published her first children’s novel Nate Rocks the World. She is currently working on the second book in the Nate Rocks series to be published in 2012.

Karen is a member of the Society of Children’s Book Writers & Illustrators (SCBWI), Association of Independent Authors (AIA), and the Independent Author Network (IAN). Karen enjoys gardening, cooking, and spending time with her husband and three children.