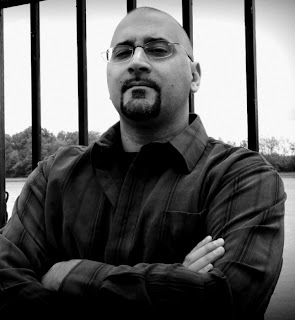 1. Which of your characters is your favorite?
I don’t really have a favorite on my own, though I do enjoy writing the goblin Barguth especially. All of my main characters have very unique personalities and motivations that set them apart and make them special. That is enjoyable for me as a writer. Most of the time, I put myself in the place of them and then have at it! From a character standpoint, I think that you need to have strong characters that people care about or else you will lose your audience quickly.

5. Who are you reading right now?
Right now I am reading Erik Scott De Bie’s Downshadow and George R. R. Martin’s Game of Thrones. What can I say, I enjoy fantasy!

8. Where do you find your inspirations to write?
I am inspired by reading novels, watching good television and comics I read growing up. I really think that exposing myself to comics and role-playing games at an early age opens your mind to a wild imagination. I have that and I would not trade it for anything. You know how some people say: ‘think outside the box’? I live there.

11. What kind of music speaks to you?
I listen to rock mostly or alternative if I am in the mood. I listen to Godsmack, Metallica, Candlebox and The Gracious Few for the most part. I dig the 80’s metal as I was a singer in a band in the late 80’s, too. Sometimes I find myself listening to soundtracks like the Game of Thrones soundtrack by Ramin Djawadi, whose work really needs to be up for an Emmy. I also enjoy the soundtracks from the television show Scrubs. And on a few occasions, I can be caught listening to some Frank Sinatra or Billy Joel.

12. Do you outline your stories or do they just take you along for the ride?
The first book I did with a very basic outline. I had a story I had written years ago and used those notes as the catalyst. I expanded on the notes as the story went along detailing only the most basic of details from points A to B. The second novel I am working on, I did a more detailed outline of what I wanted in each chapter…this seems to work out more smoothly!

14. Who are the biggest influences on your work?
I’d like to say that George R.R. Martin and R. A. Salvatore are the most influential to me. I have read a ton of Forgotten Realms novels as well as George’s Wildcards series from the early eighties. He edited them mostly.

Gary Vanucci was born in Pennsylvania in 1968. He enjoys writing, reading, music, art, anything at all that promotes creativity and activities that push the mind beyond conventional thinking. He has spent time as an amateur singer/songwriter and has spent multiple decades creating role-playing scenarios and playing games amongst various genres. Years of reading graphic novels, comic books, fantasy/science fiction novels and the like has led him to discover his true passion—writing!

Favorite Quotes: "We are what we repeatedly do. Excellence, then, is not an act, but a habit." ~Aristotle. 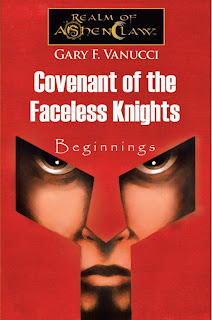 SYNOPSIS of Covenant of the Faceless Knights
When a dangerous artifact goes missing from a temple, the elderly high priest in charge eventually comes to the conclusion that he needs help. He requests aid in the form of a one-time apprentice, Garius, who is now an Inquisitor representing the Order of the Faceless Knights. After a series of interviews, Garius sets out on his quest aided by Rose, a rogue among rogues, by the battle-hungry Saeunn, and by a naïve elf named Elec, who reluctantly agrees to accompany them at the behest of the persuasive Inquisitor. The eclectic group then sets out to recover the artifact before it falls into the hands of the lich who once held it. Such is the Covenant of the Faceless Knights!

EXCERPT
The orc bore down on him quickly and was only within a few arms lengths. He could see the beast’s teeth and drool spray from its mouth as it uttered some foul orc-speak. Elec waited calmly with his weapons drawn, but had not revealed them from beneath his cloak. As the orc reached his position, Elec nimbly dove down and to his left to avoid the brunt of the charge, all the while keeping his foot outstretched enough to trip the orc. The momentum of the beast’s charge took it headlong into the mountainside, sliding on the slippery slush a bit and smashing its helmet down around its eyes, looking a bit worse for wear.

Within a second, Elec was back to his feet, spinning hard and plunging his sword into the back of the creature, placing all of his body weight into the strike. He pierced flesh, but the blade stopped on something, most likely a rib, and therefore was not the killing blow he had hoped for. He cursed his luck, thinking the strike to be well placed. His frustration nearly cost him.

The rest of the excerpt and one more can be found here:
http://www.ashenclaw.com/index.php/book-excerpts
author interviews covenant of the faceless knights gary vanucci heidi ruby miller heidi's pick six