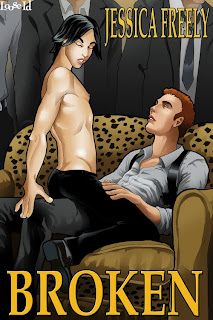 On Halloween weekend of 2007, I attended YaoiCon, a convention in San Francisco dedicated to yaoi manga. In case you don't know, yaoi is a Japanese genre of graphic novels dedicated to stories of romance between men, and it has a large female audience, both in Japan and worldwide. I had been writing and marketing yaoi manga scripts for about two years at that point, and I was on Cloud 9 because a small press specializing in original English language yaoi had picked up one of my stories and was using it to launch their new magazine. Bouncing with excitement at the prospect of seeing my first published manga on sale at the publisher's booth, I toured the dealer's room that first morning of the convention.

And came up empty.

No publisher, no booth, no magazine. I soon learned that my publisher had gone out of business and neglected to inform their writers and artists. Standing in the hallway outside the dealer's room, my manga dreams in tatters, I was so low that I knew I had to do something right away to make myself feel better. And one thing that always perks me up is schmoozing. (I know, I’m weird.) I forced myself to go back into that dealer's room and strike up a conversation with the very first publisher I encountered. That turned out to be Torquere, an epublisher of LGBT romance and my first ebook publisher.

What struck me immediately was that they were trying to sell me on why I should write for them, a complete reversal from the situation I was used to. By the end of that weekend, it was dawning on me that ebooks could provide me with what I'd long been searching for--a vehicle for publishing as many gay romance stories as I could write, in any subgenre I desired, from science fiction to contemporary. Emboldened once more, I sat down in the hotel café an hour before my shuttle left for the airport, and started jotting down one story idea after another. One of those ideas was the kernel for my seventh ebook, an LGBT romantic suspense novel entitled Broken, which is out from Loose Id on Sept. 20. http://www.loose-id.com/Broken.aspx

Broken is about Eben, the closeted younger brother of a mob boss, and Xiu, a rent boy the boss just bought from a Hong Kong triad. When Eben and Xiu fall for each other, it's either suicide or one last chance at salvation for both of them. I am donating half of my proceeds from the first four months of Broken's sales to Project Polaris,combating human trafficking and modern day slavery.

Thanks for reading. You can find me on the web at http://jessicafreely.com.