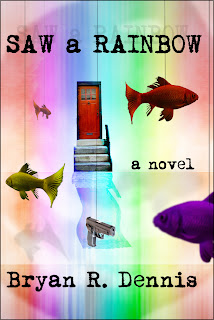 My journey to publication began when I stumbled upon Joe Konrath’s blog: A Newbie’s Guide to Publishing while researching Amazon’s Kindle e-reader. Technology had lured the reader side of me away from paper books. It was perhaps inevitable that the writer component would soon follow. Joe Konrath described his experience with traditional publishing and how he made a successful and liberating switch to electronic publishing. I was intrigued. Could it really be so easy?

One of the reasons I never bothered submitting to a big publishing house was due to the overwhelming scale of the task. Submitting query letters, writing a synopsis, hiring an agent, flying around doing book signings, and so on. It seemed more daunting than it was worth. And I’d read of the failure rate of new authors. Even many who’d gotten lucky with their first books tended to disappear afterward. Apparently, it takes so long for a book to get published that readers forget who you are.

This is not the case in e-publishing. Yes, it’s a breeze to publish yourself. Formatting was easy (following the free guide from Smashwords), and submitting to Amazon is a matter of reading step-by-step instructions. I had to relearn Photoshop to design the cover, but that was kind of fun. At the end of May 2011, I published a literary, satire: An Epitaph for Coyote. I garnered great reviews and sold about a book a day for the first couple of months. A few days ago I released my second novel Saw a Rainbow which is in the speculative/suspense genres.

So what are my thoughts now that I’m in the game?

Getting published is simple. Getting noticed? Not so much. Cream may rise to the top, but there is also gold lying at the bottom of streams. As a self-published author, I control the frequency of book releases. In fact, I have control of almost everything. This is both a blessing and a curse. Very few people can wear all the hats required. For instance, I’m a writer, not a salesman. I consider this a handicap, but not one that can’t be overcome with perseverance.

Now that publishing is so easy, marketing has become all that much more difficult. I’m trying all sorts of ways to sparkle at the bottom of the stream, but it’s a rapidly moving current this industry I’m in. Amazon recently announced a “Netflix for books.” I immediately wondered if this meant the end of indie writers (i.e. not published by one of the big publishing houses). If readers pay a monthly subscription and can read any book they want, that means my new book is suddenly the same price as Stephen King’s latest release. That’s a losing scenario for indies like me. But, then again, who knows if that model will even get off the ground?

So, the book publishing industry has undergone a dramatic upheaval due to evolving technology, and everything remains fluid right now. You have to learn and adapt. In my case, one thing is certain--getting onboard this self-publishing express has never left me bored or regretting my decision. To me, self-publishing is a game. You don’t have to be great at a game to enjoy playing it. That’s been my experience thus far.

To learn about me and my literary journey, visit my blog An Epitaph for a Writer: http://www.bryanrdennis.com
--Bryan R. Dennis
September 2011

About Saw a Rainbow:
Dante Salazar doesn’t know if he’s a drunk who dreamt he was an ancient general, or an ancient general dreaming he’s a drunk. He wakes in Las Vegas, imprisoned in an identity that doesn’t fit him, married to someone he doesn’t remember, and tormented by a stranger who won’t show his face.

A woman named Lucia haunts his memories. His love for her is the only thing that has endured the mysterious fate befallen him. What follows is one man’s search for answers. Why does he feel like an imposter in his own skin? Which memories can he trust? How will he find his lost love? And - most troubling of all - what lies buried in his back yard?

Posted by Heidi Ruby Miller at 9:48 AM