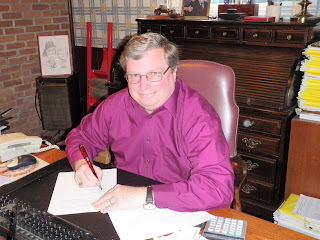 4. What else can you do besides write? I can go into burning buildings. It’s a skill most people don’t have—or want to have—but they do seem to be glad there are people around who can do it, particularly when their house is on fire. That and fish; I like to fish.

5. Who are you reading right now?
I read a lot of history as I’m about three quarters of the way through the course work for a Masters Degree in American History. Right now I’m reading Brothers, Rivals, Victors by Jonathan W. Jordan. It is one of the best books of narrative history I’ve read in a long time. While scrupulously sourced, the book reads like a novel; the best of both worlds. Another good writer in this vein is Rick Atkinson. I’m looking forward to the final book of his World War II trilogy which will hopefully be out in the next year or two.

7. What is the toughest scene you ever wrote?
The most difficult one was a story in my book about the death of a father and his step-son. The step-son drowned after rescuing a young girl who had fallen into an icy pond, succumbing to the cold water. The father had a heart attack and died on the ice while attempting to reach his step-son. Just about all of us on the call knew them both so writing about the rescue attempts by the divers and the emotions the incident brought out in the emergency responders was hard but cathartic at the same time. The opposite of that was the story in which I had the opportunity to take my son Michael inside on his first real fire. He had the nozzle and there was fire in portions of two rooms. It was a fairly-tale experience and flowed onto the paper.

8. Where do you find your inspirations to write?
I find inspiration all around me. The stories in my book represent only a percentage of the total experiences of the three generations. I hear about both hysterical and tragic incidents from other firefighters on a regular basis. Generation three, Michael, is now a live-in firefighter in Montgomery County, MD where he attends the University of Maryland (as I did) and I love hearing his stories, only some of which we share with Mom.

10. Are you into sports or other physical activities?
11. What kind of music speaks to you?
12. Do you outline your stories or do they just take you along for the ride?
13. Celebrity crush.
14. Who are the biggest influences on your work?

15. Do you still watch cartoons?
I’m a Bugs Bunny fan.

Gary Ryman is the second of three generations of firefighters, or the middle of the Oreo. He has a bachelor’s degree in Fire Science from the University of Maryland and has been employed as a fire protection engineer for over twenty-five years, and is married with a son and daughter. His son comprises the third generation of firefighters in the family making him feel both old and young and the same time.

His book Fire Men: Stories from Three Generations of a Firefighting Family